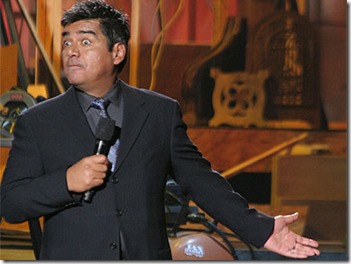 FX has closed a deal for Saint George, a new sitcom that stars George Lopez as a recently divorced working class Mexican-American balancing a number elements in his increasingly chaotic life.

The series, created by Lopez, will be produced on the same model as Charlie Sheen’s Anger Management, with an initial ten-episode order that will, should ratings warrant, be expanded to a potential total of one hundred.

The official press release, with further details, follows the jump.

Saint George marks Lopez’s first starring role in a sitcom since his long-running ABC series, George Lopez. The multi-camera ensemble comedy revolves around the chaotic life of a recently divorced working class Mexican-American turned successful entrepreneur. In the sitcom, Lopez will portray a man who struggles to balance his demanding ex-wife, his 11-year-old son, his overbearing mother who just moved in, and his uncle, as well as his new role as a philanthropist “giving back” by teaching history once a  week at a night school.

“George Lopez is an incredibly gifted actor-producer and one of the most talented comedians in the business,” said Saftler.  “The 10/90 model requires a unique individual who has the ability to pull off this kind of daunting schedule. George is that guy and we couldn’t be happier that he chose FX as the home for his new project.  We’ve had a great experience working with Kevin Beggs and his team at Lionsgate as well as with Mort Marcus and Ira Bernstein at Debmar-Mercury, and are thrilled to expand that relationship.”

Lopez said, "I’m excited about my new show, couldn’t think a better group of people or better place to create than FX…..Now to get ready… Back to Pilates!"

Williams added, “George is one of the smartest, funniest guys around. David and I are thrilled to be working with him.”

The series will be produced by Lionsgate Television in association with Wind Dancer Films, Travieso Productions and 3 Arts Entertainment.

“FX has been an outstanding partner and we know it will provide the perfect fit for this terrific concept from the great comedy mind of George Lopez,” commented Debmar-Mercury Co-Presidents Mort Marcus and Ira Bernstein. “Our business model is all about finding unique talent and broad concepts that have the best chance of succeeding both on networks and later in off-net syndication. George Lopez’s broad appeal and strong following from the rapidly growing Hispanic audience, combined with the unmatched experience and track record of Matt and David, makes us extremely confident they can deliver our next big hit."

FX has ordered 10 episodes of Saint George and, as is standard with the 10/90 model, if the series meets designated ratings thresholds over it first 10-episode run, the network will trigger an additional 90-episode order.

Lionsgate Television Group President Kevin Beggs added, “In the tradition of George’s frank and fearless standup comedy, Saint George will reflect his no-holds-barred comedic take on the tensions surrounding race, class, sex and family life in Los Angeles through the eyes of a man straddling two separate cultures. George is an extraordinary talent and we are privileged to be working with him and with Matt and David, who are responsible for some of the most successful television comedies ever produced.”

Williams and McFadzean are behind some of the greatest comedies of all time. Williams began his TV career writing and producing for The Cosby Show before co-creating A Different World, creating and executive producing Roseanne and, under the Wind Dancer banner with Carmen Finestra and McFadzean, co-creating Home Improvement, Carol Burnett’s Carol & Company, Dave Chappelle’s Buddies and Dan Aykroyd’s Soul Man. Williams is represented by WME.

Lopez, whose eponymous sitcom George Lopez initially aired on ABC from 2002-07 and went on to perform well in off-network syndication, will co-write the first episode of the series with Williams and McFadzean.

The 10/90 model is a unique syndication model crafted by Debmar-Mercury for multiple sitcoms, including FX’s Anger Management, Tyler Perry’s House of Payne and Meet The Browns, and Revolution’s and Ice Cube’s Are We There Yet? Saint George will air exclusively on FX until the off-network episodes start airing in broadcast syndication in fall 2015.

In addition to his television career, Lopez continues to perform as a standup comic and to record comedy albums. Team Leader was nominated for the 2004 Grammy Award for Best Comedy Album. He also wrote an autobiography entitled Why You Crying, which was published that same year.

Regarded as one of the top comedians, Lopez has received several honors for his work and contributions to the Latino community, including the 2003 Latino Spirit Award for Excellence in Television. He was also named one of "The Top 25 Hispanics in America" by Time magazine in 2005.

FX is the flagship general entertainment basic cable network from Fox. Launched in June of 1994, FX is carried in more than 98 million homes. The diverse schedule features a growing roster of critically acclaimed and award-winning hit dramas series, including Sons of Anarchy, Justified, The Americans, and the upcoming drama series The Bridge (July 2013); the miniseries American Horror Story: Coven; and the acclaimed hit comedy series Louie, Archer and  Wilfred. The network’s library of acquired box-office hit movies is unmatched by any ad-supported television network. FX’s roster of acquired hit series includes Two and a Half Men, Anger Management and, coming in 2014, Mike & Molly.

Lionsgate is a leading global entertainment company with a strong and diversified presence in motion picture production and distribution, television programming and syndication, home entertainment, family entertainment, digital distribution, new channel platforms and international distribution and sales.  The Company has built a strong television presence in production of primetime cable and broadcast network series, distribution and syndication of programming and an array of channel assets.  Lionsgate currently has 26 shows on 19 networks spanning its primetime production, distribution and syndication businesses, including such critically-acclaimed hits as the multiple Emmy Award-winning Mad Men, Weeds and Nurse Jackie, the new comedy Anger Management, the network series Nashville, the syndication successes Tyler Perry’s House of Payne, its spinoff Meet the Browns, For Better Or Worse, The Wendy Williams Show, Are We There Yet? and the upcoming Orange Is The New Black, an original series for Netflix. Lionsgate handles a prestigious and prolific library of approximately 15,000 motion picture and television titles that is an important source of recurring revenue and serves as the foundation for the growth of the Company’s core businesses.  The Lionsgate brand remains synonymous with original, daring, quality entertainment in markets around the world.