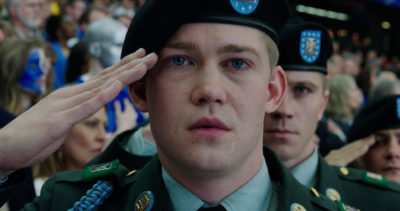 Billy Lynn and the other soldiers in Bravo Squad become heroes following a battle in Iraq and are brought home to do a prooganda tour.

As the tour culminates in a spectacular Thanksgiving Day halftime show, flashbacks show what actually happened in Iraq. They are in contrast to what the country thinks they are and the difference is staggering.

Billy Lynn’s Long Halftime Walk is directed by Ang Lee and stars newcomer Joe Alwyn as Billy Lynn. It was shot at an ultra-high frame rate to create an entirely new digital experience to dramatize war.