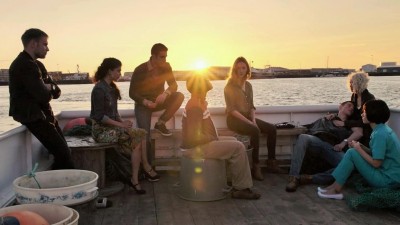 Sense8 is the new Netflix series from The Wachowskis and J. Michael Straczynski that postulated a unique kind of human evolution – Sense8s. The eight lead characters are awakened to being part of a new level of consciousness that allows them to see, hear, and feel each other’s point of view, while also sharing each other’s thoughts, minds, skills.

The series is a hard R-rated wonder. Yes, there’s sex and violence but there’s also a sense of wonder and an exploration of what becoming Sense8 would be like – not to mention what it could mean for us as a species. I came to the series too late to give a timely review, but it is one of the best shows of the year and Sense8: Creating The World, a new 25-minute behind the scenes documentary is fascinating stuff.

If Sense8 wasn’t so odd and unique, Sense8: Creating The World might come as a puff piece hyping the show. Instead, it feels like a sincere effort to capture the series’ unique structure and diverse cast’s enthusiastic response to doing something so fresh and different. Interesting side note: the doc was posted at about the same time the news came down that the series was getting a second season.

The doc is also unique in that, outside of a comment from Straczynski, the entire piece is the cast and one or two key behind-the-scenes contributors (like director Tom Tykwer) explaining not only what makes the show so different, but also the actual production. In one sequence, Brian J. Smith (Stargate Universe) talks about a single scene that takes less than a minute onscreen but was shot in four different cities around the world.

Much is made of the idea of a series shooting in eight major cities around the world so that, when the script calls for scenes in Mumbai or Nairobi, they’re shot in Mumbai and Nairobi – and what that’s like for the cast, members of whom frequently shoot a single scene in two or more cities.

Oddly, the diversity of the cast isn’t really mentioned – though certain cast members talk about showing the others their hometowns (Doona Bae, for example, talks showing them Saigon, while Wolfgang Bogdanow talks about showing off his hometown, Berlin). That’s odd because it’s one of the most diverse casts ever seen in a TV series.

We get to watch as the Wachowskis shoot sense where one character allows another to take the controls, so to speak – and some of the sequences are marvels of unexpected simplicity.

After the twenty-five minutes, fans of the show will know a whole lot more about what it takes to make it. Newcomers who see Sense8: Creating The World first might be a bit at seas at first, but will likely want to check it out – the people involved seem to be having that much fun.