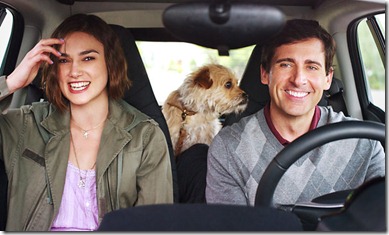 A chance encounter between two neighbors leads to a peculiar road trip as the countdown to the end of the world begins.

Dodge (Steve Carell) and his wife Linda (Nancy Carell) are sitting in their car when a newsman reports that the attempt to destroy the 70-mile wide meteor, whimsically called Matilda, has failed. In twenty-one days it will collide with the Earth – destroying everything. Linda gets out of the car and runs away. We get the idea that this is only the latest indignity to have been piled on Dodge in his life, though it won’t (quite) be the last.

Dodge’s friends Warren (Rob Corddry) and Diane (Connie Britton) invite him to an End of the World Party, where Diane hopes to set him up with Karen (Melanie Lynsky) – who arrives at the party wearing a fur coat, a tiara and a very sexy dress. ‘I’m wearing everything I’ve never worn,’ she announces. And it is a true End of the World party – Warren is encouraging their children to drink; people are hooking up; one couple arrives with heroin! (Why the hell not?) When Dodge hides in the bathroom, Diane comes in after him…

Even with looting and decadent partying going on all around him, Dodge still goes to work – selling insurance. At least, that is, until he reaches his breaking point while discussing the company’s Apocalypse Policy and just walks out, leading to… winding up with an abandoned dog?

We meet Penny (Keira Knightley) as Dodge is checking for mail (the box is empty). She comes running out of an apartment on the floor below him, clutching an armful of records and crying as her boyfriend (Adam Brody) slams the door behind her.

In a nice twist, she and dodge do not meet each other quite yet. Instead, he is awakened by the sound of her crying on the fire escape outside his apartment – she’s just broken up with her boyfriend and is hiding on the fire escape while he gets his stuff out of the apartment. Impulsively, she latches onto Dodge like a shipwrecked sailor washed up on a desert isle.

Despite the age difference, they somehow become friends and in their conversation, they learn what each wants to do over the planet’s last three weeks of existence – he wants to try to reconnect with Olivia, the girl he let get away; she wants to fly home to England to be with her parents, siblings, nephews and brand new niece.

Dodge tells her he knows a guy who has a plane, so if she’ll help him find Olivia, he’ll try to get her home to England. Ad so, the road trip to forever begins. 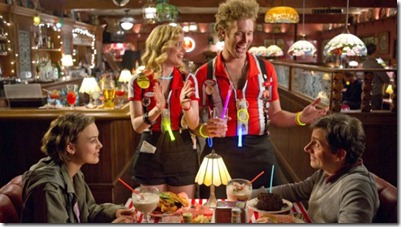 When Penny’s car runs out of gas, their adventure leads them to hitch a ride with Glen (William F. Petersen), a cheerful fellow with a couple of shovels in his truck and, after an encounter with an overzealous policeman, borrow a Smart Car from an old flame of hers (Derek Luke).

There’s even a stop at a TGI-type chain restaurant called Friendsy’s, where the corporate policy friendliness has not only become real, it has been taken to a desperate extreme that feels real.

Each encounter shows a different reaction to the coming apocalypse: Glen doesn’t want to know the hour of his death and has taken steps); Speck (Penny’s old flame) is in survivalist mode – as if twelve inches of titanium will be enough), and they encounter a much more optimistic group on a beach.

For all the mundane and quirky characters in Seeking a Friend, though, road trip movies – even ones in the last days – are about two people getting to know each other. Though Dodge and Penny frequently react differently to their circumstances, they discover they complement each other – opposites attracting and then, fitting to make a complete, unique being. In another sense, though, the duo are on a hero’s journey, too, discovering themselves, as well as each other and finding a kind of peace.

Given the set-up, Seeking a Friend comes to a completely expected conclusion in the sense that world ends. Writer/director Lorene Scafaria (Nick & Nora’s Infinite Playlist) has created a story that earns its final scene by showing us the best – a news anchor (Mark Moses) who calmly continues to report until the planet’s last few hours before going home to his wife – and worst of humanity (the riots, the decadence) before giving us one last twist that sets up the final scene.

When I saw the first trailer for Seeking a Friend, I was immediately reminded of the Don McKellar film Last Night, which tells a vaguely similar story and, until this week was, hands down, the best end of the world movie I’d ever seen. As I watched Scafaria’s mix of quirky and mundane characters move through their series of episodic encounters in Seeking a Friend, I was reminded of the films of Jim Jarmusch and the way he can take seemingly disparate episodes and tie them together into a unique, satisfying whole.

If Jarmusch had made Last Night, it might have been a bit like Seeking a Friend for the End of the World – which has now joined Last Night at the top of my list of best end of the world movies.