Chris Carlisle, head of Fox 21, 20th Century Fox TV’s “alternative” arm, believes Alien Nation could be the next franchise revival for Sci Fi, which found huge success in dusting off Battlestar Galactica and reworking it for today’s audience.. Alien Nation is a concept that could work across multiple genres – drama, comedy, satire, procedural…

“It’s absolute perfect timing for this type of show,” Carlisle said. “They’re looking for more grounded sci-fi and close-ended episodes, and at the heart of Alien Nation, it’s a cop movie. It’s grounded. And it has a tremendous amount of dramatic possibilities and humor.”

“It’s very much in keeping with what we’ve been looking to do — find themes that are more than just hard sci-fi, something that feels contemporary and relevant and invites a broad audience in,” said Sci Fi original programming exec VP Mark Stern. It could also help build stability for Sci Fi’s rebranding as Syfy which takes place next week.

“It’s genre mixed with procedural mixed with funny and mixed with big, giant scary,” Minear said. “I love serialized stuff, but this is also a cop franchise. That Starsky and Hutch/Lethal Weapon buddy cop comedy is absent from TV right now.” 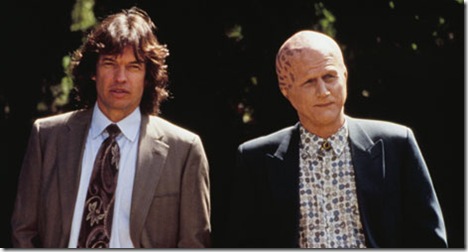 Alien Nation 2.0 will be set in the Pacific Northwest, about 20 years after the first ship of aliens – who were banished as slaves – crash lands. The series will take place at some point in the 2020s when the Newcomer population has exploded from mere thousands to over three million – most of whom live in a segregated area Minear compares to the North African ghettos in France

“You can take (the original ‘Alien Nation’) a step forward and really do a show that encompasses the clash of civilizations, and the idea of a ghettoized minority,” he said. “You can touch on racism, terrorism, assimilation, immigration. And there’s room for satire.”

Stern said Sci Fi had been looking at “Alien Nation” as a potential franchise for several years. “The challenge is how do you do it in a way that will reinvent it without it feeling like a derivative rehash,” he said. “We sat down with Tim, who is someone we’d been looking to work with for quite a while, and his approach felt like it wouldn’t be a traditional adaptation. We got excited.”

Minear said he’d been anxious to develop for cable – and in particular, Sci Fi. The success of “Battlestar” fueled his interest in reviving “Alien Nation,” he said. “Twenty years (after ‘Alien Nation’), TV as a whole has evolved, and you can explore issues and go deeper with subject matter than you ever could before,” Minear said. “On cable, you can play with ambiguity. This is a place I want to be.”