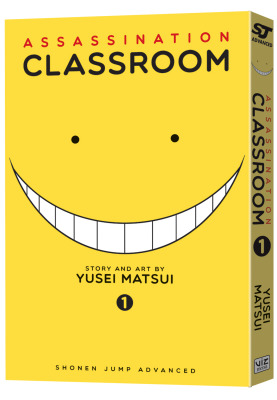 Being an adolescent is tough enough without having to save the world for an alien invader – especially when he’s the best teacher you’ve ever had!

That’s the conundrum facing the students of Assassin Classroom, now available from VIZ Media. For further details, follow the jump.

A Class Of Misfit Students Must Save Mankind From A Destructive Alien Invader Who May Also Be The Best Teacher They Ever Had; New Action Series To Launch In Print And Digitally

This high school alien-teacher in the classroom action comedy by creator Yusei Matsui is rated ‘T+’ for Older Teens and debuts in print under the Shonen Jump Advanced imprint. ASSASSINATION CLASSROOM Vol. 1 will carry an MSRP of $9.99 U.S. / $12.99 CAN. Subsequent volumes for the continuing series are scheduled for print release on a bi-monthly basis.

The digital edition of ASSASSINATION CLASSROOM will also debut on December 2nd for $6.99 (U.S./CAN), across all platforms serviced by VIZManga.com and the VIZ Manga App. The free VIZ Manga App continues to be the top application for reading digital manga and features a massive library of the most popular series in the world. The digital edition will be similarly available on digital storefronts for the Kindle, iBooks, GooglePlay, Kobo, ComiXology, and Nook.

A humorous and action-packed story about a class of misfits who are trying to kill their new teacher – an alien octopus with bizarre powers and super strength! The teacher has just destroyed the moon and is threatening to destroy the earth – unless his students can destroy him first. What makes things more complicated is that he’s the best teacher they’ve ever had!

“ASSASSINATION CLASSROOM is an over-the-top, action thrill ride that readers will definitely want to put on their manga hit lists,” says Annette Roman, Editor. “The series has drawn widespread acclaim in Japan where it is one of the top titles featured in Shonen Jump magazine. We invite readers to spend their winter semester at a high school unlike any other with a zany class of misfit students upon whom rests the future of humanity!”

Manga creator Yusei Matsui was born in Saitama Prefecture, Japan and has been drawing since elementary school. Some of his favorite manga series are Bobobo-bo Bo-bobo, JoJo’s Bizarre Adventure, and Ultimate Muscle (all published in North America by VIZ Media). Matsui honed his talents working as an assistant to manga artist Yoshio Sawai, creator of Bobobo-bo Bo-bobo. In 2005, he debuted his original series, Neuro: Supernatural Detective, in Weekly Shonen Jump. In 2007, Neuro was adapted into an anime series. ASSASSINATION CLASSROOM began serialization in Weekly Shonen Jump in Japan in 2012. An anime adaptation based on the manga series is set to debut in early 2015.

For more information on ASSASSINATION CLASSROOM and other manga titles from VIZ Media, please visit www.VIZ.com.