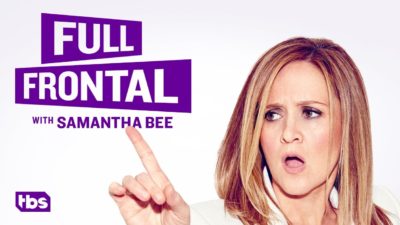 As the press release so precisely phrases it, ‘Samantha Bee interviews her first male president, Barack Obama’ for the episode of Full Frontal that will air on Monday, October 31st.

The presidential interview follows Bee’s October 24th interviews with a host of international political figures along with former Secretary of State Madeleine Albright (for the video, follow the jump).

Next week on TBS, Full Frontal with Samantha Bee will feature a thought-provoking interview with President Barack Obama. A legal scholar and former junior Senator from Illinois, Mr. Obama has served the past eight years as the President of the United States of America. Samantha Bee’s interview of President Obama will air on TBS Monday, Oct. 31, at 10:30 p.m. (ET/PT).

“Talking to Secretary Albright was especially inspiring,” said Bee. “I hope to interview other former Secretaries of State in the very near future.”

The interview comes as President Obama has been hitting the campaign trail in support of get-out-the-vote efforts on behalf of Democratic nominee Hillary Clinton. It covers a range of topics, from the 44th president’s legacy to the challenges the new Commander in Chief will face when she takes office in January. (Yes, “she.” Spoiler alert.)

Since its debut in February, Full Frontal with Samantha Bee has became one of late night’s most buzzed-about and critically acclaimed shows, frequently cited as essential viewing during this election season. Ranking among the Top 5 late night shows on broadcast or basic cable, Full Frontal with Samantha Bee reaches more than 3.3 million viewers per episode across TBS’s linear, mobile and digital platforms. In addition, online clips have generated 96 million views on the show’s YouTube channel (www.youtube.com/fullfrontalsamb). The series is executive-produced by Samantha Bee, Jason Jones, Jo Miller, Miles Kahn and Tony Hernandez.