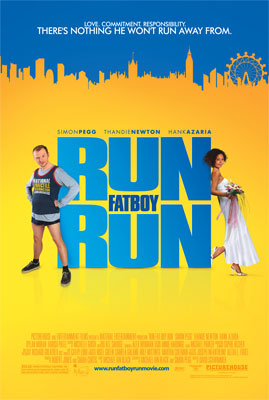 Apparently, even Simon Pegg’s rewriting of a Michael Ian Black script wasn’t enough to keep Run, Fatboy, Run from becoming a mash-up of romantic comedy and sports movie clichés. This is not quite one of the worst movies of the year. There are major spoilers in this review – because, well, I can’t see the point in not mentioning them. They’re clichés!

The trailer for Run, Fatboy, Run suggests that this film is going to be something on the order of an Edgar Wright/Simon Pegg collaboration. Unfortunately it’s nothing of the sort. Instead, it’s only claim to any kind of quality is in Simon Pegg’s performance, which is far better than the material, and David Schwimmer’s direction which keeps the film moving quickly enough that the worst of the gags aren’t onscreen long enough for them to make anyone ill.

The movie opens with Dennis [Pegg] leaving the very pregnant Libby [Thandie Newton] at the altar because of his fear of commitment. Now, five years later, he is flabbergasted to discover that she has a new love, Whit [Hank Azaria], whom his son, Jake [Matthew Fenton] seems to adore. When he learns that Whit runs marathons, he decides that he’ll run the Washington Marathon to show Libby that he’s changed and really can finish something. 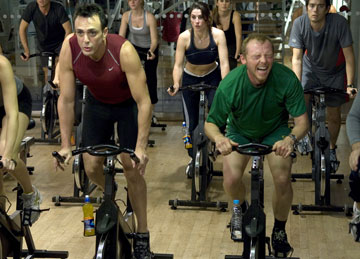 From that point on, the film continues to collect clichés at an astounding pace. Whit, of course, isn’t the perfect boyfriend/fiancé to be; Dennis requires help – from his wanker, gambling addict of a brother, Gordon [Dylan Moran] and from an overweight East Asian neighbor, Mr. Ghoshdashtidar [Harish Patel] – whose presence only serves to show that Dennis [despite fat makeup] isn’t actually fat; Whit proposes at a posh party – that HE is throwing; Whit’s villainous nature is caught on live TV; and the inevitable finish to the race [SPOILER: there are only two choices here: Dennis overcomes all odds and wins, or Dennis hobbles over the finish line well after everyone else – and in either case, Libby and Jake are waiting for him]. 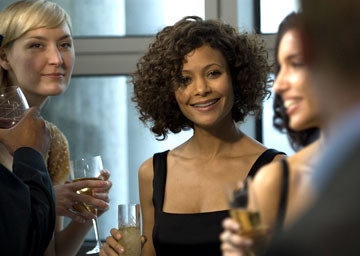 It’s a great pity that Thandie Newton – who has some serious chops – is relegated to the task of pure adornment. Yes, she’s beautiful. No, she shouldn’t have done this film. She is utterly wasted here – perhaps even more than in last year’s multiple-Razzie-winning Norbit.

Really, there’s just about no way to not figure out what’s going to happen here before the end of the first act. Even the inevitable training montage is strictly by-the-numbers. So, if you’re looking to spend an hour and forty minutes doing something outside your routine, skip Run, Fatboy, Run and watch some lovely paint dry.

6 thoughts on “Run, Fatboy, Run: An Exercise in Clichés!”