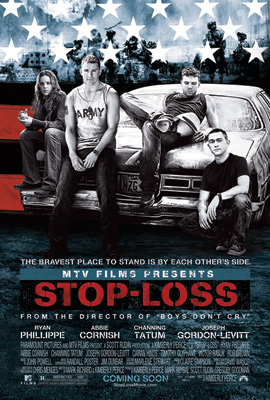 After fulfilling his tour of duty in Afghanistan and Iraq, Staff Sergeant Brandon King [Ryan Phillipe] returns home to his family, expecting that he’ll be free to get on with his life. Instead, he is stop-lossed – ordered back to duty for another tour of duty in Iraq. With his life completely turned inside out – what value can there be in honor if the military won’t honor its promises? – King decides to fight the orders.

There is a clause in the contract volunteers sign when they join the armed forces that allows the military to force them back into battle in times of war. Strictly speaking – as Sgt. King notes in speaking with his C.O. – what is going on in Iraq doesn’t actually seem to be a war, legally speaking.

While King takes to his heels in order to try to find help from a senator who had just pinned a Purple Heart on him, two of his best buddies [one of whom grew up with him] are having issues of their own.

Steve Shriver [Channing Tatum] has dug into his front lawn under the impression that he’s back in Iraq and trying to avoid discovery by the enemy. Tommy Burgess [Joseph Gordon-Leavitt] is even worse off – he’s drinking uncontrollably and has so thoroughly frightened his wife that she has taken out a restraining order against him. 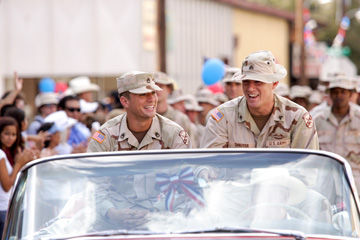 In King’s search for help, he is aided by Michelle [Abbie Cornish], Shriver’s fiancée – who’s more than a little disturbed by his [Steve’s] behavior. In the background, more or less, are King’s parents [Ciaran Hinds and Linda Emond], who are prepared to stand behind their son even if he decides to sneak across a border into Canada – or Mexico.

After the opening scenes, which deal with King, Shriver and Burgess’ last action in Iraq – being led into an ambush, where two men die and another is badly injured – Stop-Loss becomes the story of these three men, and how their experiences have led to problems that would have disqualified them from further service in any previous war. Both King and Shriver are having flashbacks, and Burgess’ behavior is purely self-destructive.

By keying in on these three men, Peirce [who co-wrote the script with Mark Richard] not only shows us the effects of war on three different personalities, but also the injustice in ordering even one of them back to the front [such as it is].

In Shriver, she gives us a man with the mindset that re-signing is the right thing to do, regardless of whatever mental health problems his previous tour might have left him with. When King goes AWOL in search of help, Shriver decides to sign up for sniper school [then he’ll be the one raining death from hidden locations]. 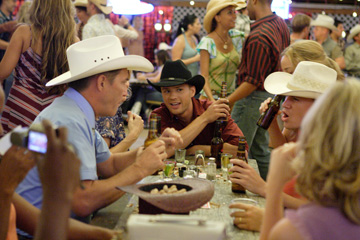 In King, we are shown a man who has done his duty, with honor, and expects that his country treat him with no less honor in return. When he flees, in order to try to find a way to fight his stop-loss, he is trying to come to grips with what honor and duty mean – to him and to his country – in these unique times.

Burgess, on the other hand, is so completely unable to readjust to civilian life that, even after he’s gotten drunk and behaved criminally, he can’t face leaving the army because it’s now the only place he feels he belongs.

Special mention should be made of Australian actor Abbie Cornish, who makes Michelle tough and vulnerable in just the right ways. It’s almost impossible to watch her talk about her inability to live the life of an army wife without it breaking your heart – and yet, she’s tough enough to help her fiancés best friend on his quest for honor.

Although Peirce gives us a film that shows the effects of the War on Terror on these three men, she also makes a point of covering the subject of stop-lossing with enough emphasis to make us aware that there is something very wrong going on here. And despite comments from cast and crew to the effect that the film is just about the characters, there are facts shown before the closing credits that reveal some staggering numbers – one of which is that of the troops that served in Iraq prior to The Surge, 81,000 – that’s eighty-one thousand – of them were stop-lossed. 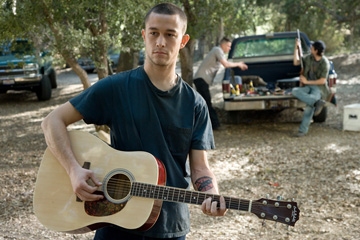 In Stop-Loss, we’re getting a film that says something important as it introduces us to the plight of some memorable characters. If Peirce has a bit of a tendency toward holding certain shots overlong – and letting the music build a bit too much – on occasion, her ability to draw some powerful performances from her cast, and the way she captures the feel of what’s best about Texas, is more than enough to make up for that.

Stop-Loss is at least as smart as Boy’s Don’t Cry in the way that it gets to the core of its characters, and in the way Peirce uses light and shadow – both for the Iraq and Texas arcs – to emphasize [and occasionally counter] mood and tone. She captures the feel of action in Iraq as well as the feel of a bar full of partying Texans. And if the final scene seems to make the entire exercise seem pointless, maybe that’s the point.

In terms of entertainment, Stop-Loss is frequently gripping and more than a little humorous. Peirce’s biggest accomplishment may be that in exploring three troubled characters and bringing the little known stop-loss clause into the public light, she has enabled more people to understand what American armed forces are going through both at home and abroad. In that way, she’s shown honor and support for the troops while making an eminently watchable movie.