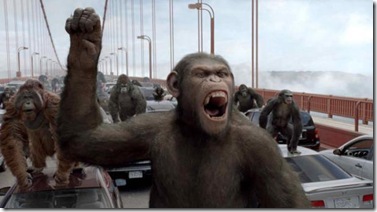 Scientist Will Rodman [James Franco] has a great deal riding on his experimental drug, ALZ-112, which is being tested on chimpanzees. If it works, it will cure Alzheimer’s Disease – which has reduced his father [John Lithgow] to a shadow of his former self. It will also make a ton of profits for Gen-Sys, run by Steven Jacobs [James Olyelowo] – or so it seems until the chimp that has displayed the best results goes berserk and scares the hell out of the company’s board of directors.

After the chimps used in the tests have been put down, their handler, Robert Franklin [Tyler Labine] reveals that the berserk chimp was actually trying to protect her newly born baby – which Franklin persuades Rodman to sneak out of the facility. It doesn’t take long for him to discover that the young chimp is incredibly smart and he uses stolen samples of the drug to restore his father to lucidity.

Through an incident with a neighbor [David Hewlett], Rodman takes Caesar [named by his father] to a vet [Frieda Pinto] and they wind up together, nudged by Caesar signing that they should be together [I did say that he was smart]. 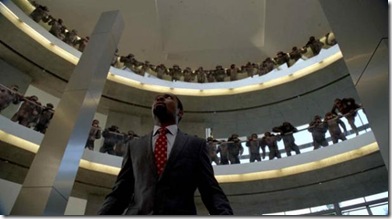 Using Caesar as proof of his work’s effectiveness, Rodman gets a chance to start again, but this time, there’s an unexpected side effect that will play heavily into the franchise’s future.

Unfortunately, the elder Rodman’s immune system adapts to the ALZ-112, and he wanders off, incurring the ire of that same neighbor and Caesar’s efforts to protect him wind up with Caesar in the custody of Animal Control – in a primate house that is maintained, sort of, by the ignorant, mean son [Tom Felton] of the facility’s manager.

Using his growing intelligence and experience, Caesar wins the respect and support of his fellow primates and things rapidly become explosive.

In an effort to reboot the Planet of the Apes franchise, writers Rick Jaffa and Amanda silver effectively set up the initial moments in the chain of events that will lead to the end of humanity. Director Rupert Wyatt gets an adequate performance from Franco and a rather hammy one from Olyelowo, and Pinto is primarily window dressing, but moments of brilliance from Lithgow and a truly astounding performance by Andy Serkis as the motion-capture-animated Caesar make rise of the Planet of the Apes worth seeing.

In fact, the film is a technical masterpiece of integrating live-action and motion capture, seamlessly. It does what it needs to do in terms of setting the stage for future episodes in a brisk, efficient entertaining manner [it’s barely an hour and forty-five minutes long]  – which is considerably more than some recent blockbusters have done.

One thought on “Rise of the Planet of the Apes Doesn’t Monkey Around!”