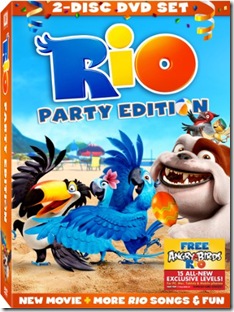 Rio, from director Carlos Saldanha [the Ice Age Trilogy], is a fun romp in Rio de Janeiro at Carnivale time. The DVD comes with a surprising bounty of extras [thanks for remembering the majority of us who haven’t gone high-def, Fox Home Entertainment!].

The movie opens with a series of events that transport a newly born blue macaw from the Brazilian jungle to the home of young Linda [Sofia Scarpa Saldanha], who names him Blu promises to always look after him.

Fifteen years later, Linda [Leslie Mann] now runs a bookstore. She and Blu [Jesse Eisenstein] have developed a sparkling routine for their lives when Tulio [Rodrigo Santoro], a Brazilian ornithologist, appears to tell her that Blu is the last male blue macaw in the world and he would like take him back to Brazil to mate with the last female blue macaw to try to save the species. No sooner are they in Brazil than Nigel [Jemaine Clement], a very Sidney Greenstreet-ish cockatoo, assists the kidnapping of the blue macaws and Rio shifts into high gear.

The rest of the film is, basically, two plot arcs: Blu and Jewel [Anne Hathaway] escape their captors and try to break the chain that holds them together, and Tulio and Linda try to find the two birds. The pair of blue macaws is hindered by the fact that Blu has never learned how to fly, and Tulio and Linda have to rely on Fernando [Jake T. Austin], a young boy who knows more about the theft than he should.

There are a few big laughs in Rio – many coming from the supporting characters who try to help, or hinder, the main characters. Tracy Morgan is terrific voicing slobbery bulldog, Luiz, the mechanical whiz who’s supposed to get that chain off Blu and Jewel. The trio of smugglers who enlist Nigel’s aid are also responsible for chuckles. Mostly, though, the film sparks chuckles and grins – and one or two genuinely touching moments. In the leads, Eisenberg is perfectly cast as the cerebral but earthbound Blu [and has a surprisingly good singing voice], and Hathaway is delightful as the spunky, independent Jewel.

Where Rio rally sings is in Saldanha’s detailing, which really brings the jungle to life – you really see it as a unique world. The flying sequences are also terrific – if not quite in the same league as How to Train Your Dragon. There is also a sequence in a Carnivale parade that is particularly impressive. All three sequences look almost as impressive in 2D as in 3D.

Rio is a better than average film with a lot of activity and odd antics to keep kids engaged, but not so silly as to lose its adult audience. It doesn’t have the same madcap energy that lifted Ice Age to hit status, but it’s certainly much better than the Ice Age sequels.

And speaking of Ice Age, in Rio’s theatrical run, that trilogy’s saber-toothed squirrel/whatsit, Scrat, was featured in a short that preceded it – and it is included on the DVD. It’s called Scrat’s Continental Crack-Up and, even though it’s more of the same [Scrat trying to find a place to bury his acorn with global consequences], it’s energetic fun that nicely sets up the main feature.

Frankly, when considering some of the sorry excuses for comedies that came out this summer, you’d be well ahead of the game to just rent Rio.

Disc Two: Explore the World of Rio; Saving the Species: One Voice at a Time; The Making of Hot Wings; Boom-Boom Tish-Tish: The Sound of Rio; Carnival Dance-O-Rama; The Real Rio; Theatrical Trailer