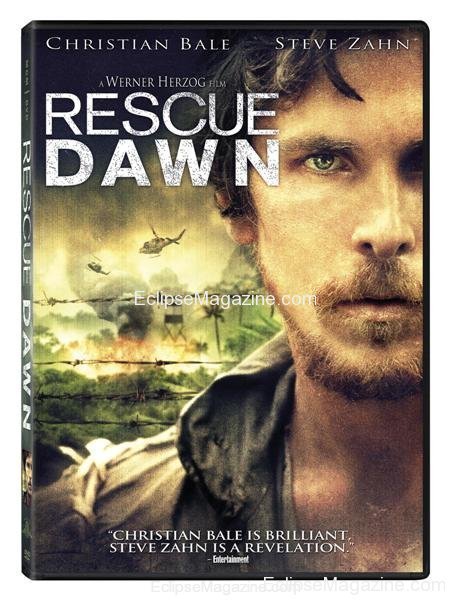 Rescue Dawn is one of the year’s best films, don’t be surprised if Christian Bale doesn’t get some award nominations for his steller performance as Dieter Dengler, one of the first American pilots shot down during the early stages of the Vietnam War. Not only did he survive an horable ordeal but he managed to escape as well. Bale is absolutely amazing in this film, it’s a shame that it got lost in the summer blockbuster season. But courtesy of MGM Home video you have a chance revisit this excellent film and get a free copy of the DVD. I really hope MGM is smart enough to launch an award campaign around this film, it is one of the year’s best. Also you can check out my interview with Christian Bale, Director Werner Herzog, Steve Zahn and others. To win this DVD, read the Press release and leave a comment about your favorite Christian Bale movie and why. Personally I know many of you will say Batman Begins, but my favorite CB film is the little know Equilibrium he was really bad ass in that part. Then of course there’s American Psycho and his love of Huey Lewis and Phil Collins. We have five copies of this DVD the contest will run November 12 to 27, 2007.

Featuring “outstanding” (MAXIM) performances by Steve Zahn (Sahara, Riding In Cars With Boys) and Jeremy Davies (Dogville, Solaris), Rescue Dawn marks the first truly American film from Herzog and is “an exciting edge-of-your-seat escape movie” (Newsweek, David Ansen) that explores the darkest hours of human peril, but leaves you with an uplifting message about triumph over adversity and the true meaning of duty, honor and courage.

Rescue Dawn will be available on DVD in widescreen format with English Dolby Digital 5.1, Spanish and French Dolby Surround and English and Spanish Subtitles and features commentary by director Werner Herzog and interviewer Norman Hill, three deleted scenes, featurettes and more. The Rescue Dawn DVD will retail for $29.98 U.S./$43.48 . Pre-book is October 24.

In 1965, an American pilot on a top-secret bombing mission was shot down over and taken to a hellish prison camp deep in the impenetrable jungle of . What followed was one of the most remarkable and harrowing experiences of the entire Vietnam War. Inspired by the true story of Dieter Dengler (Christian Bale) and written and directed by internationally acclaimed filmmaker Werner Herzog, Rescue Dawn is an uncanny tale of camaraderie and betrayal, courage in the face of despair, and triumph over tragedy. It stands as a true testament to the impossible boundaries of the human condition and the invincibility of the American spirit.

• The Making of a True Story Documentary

o What Would Dieter Do?

o Don’t Tell Her You Love Her