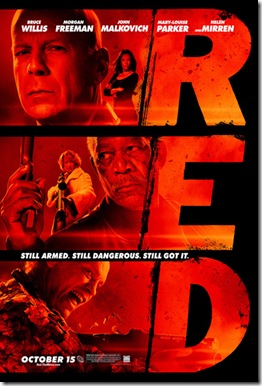 Frank Moses [Bruce Willis] is not taking retirement well. He lives in a box of a condo with paintings on the wall that look like they came with the place, and tears up his retirement benefit cheques so he can talk with Sarah Ross [Mary-Louise Parker], a clerk in HR whose unique humor appeals to him.

When, late one night, a platoon of black-clad, heavily armed figures attempt to kill him, he disposes of them [losing his condo to the resultant blasts of light and medium-heavy ordinance] and takes it on the lam. His first stop is to visit Sarah and persuade her to accompany him since their conversations have probably made her a target, too. In this case, persuade equals abduct with improvised bonds and a duct tape gag. At one point, she admits that while it’s not her best first date, it’s not her worst, either.

Frank’s next step is to recruit help – three retirees he used to work with. By this point, we’ve learned that Frank was not a simple VIA analyst, but a black ops agent who had done some impressive things – including toppling governments. Obviously, his past has come back to haunt him – aided and abetted by CIA agent William Cooper [Karl Urban] at the behest of his immediate superior, Cynthia Wilkes [Rebecca Pidgeon], on behalf of some mysterious, high ranking personage.

His former team – munitions and camouflage expert Marvin Boggs [John Malkovich], Joe Matheson [Morgan Freeman] and wetwork specialist Victoria [Helen Mirren] – is absolutely thrilled to get back into the game [especially since, as part of Frank’s team, they’re probably targeted as well]. He even seeks intelligence from one of his old enemies, retired KGB honcho, Ivan Simanov [Brian Cox] – who will be expecting a favor of equal import in return [setting the stage for a sequel if RED is a hit].

Based on a considerably darker graphic novel by Warren Ellis [Transmetropolitan, Crooked Little Vein] and Cully Hamner [Detective Comics The Question serial], Jon and Erich Hoeber have taken the graphic novel’s general ideas and turned them into a mostly light hearted action romp that takes the tropes of action, espionage and romance films and entwined them around and through the over-the-hill-gang idea. The result is Robert Schwentke’s fast-paced, wickedly silly film that might make some kind of nod toward respecting the experience [if not necessarily the wisdom] of our elders.

Mostly though, RED [which actually stands for Retired: Extremely Dangerous] is a fun blast that says age and experience will take out youth and enthusiasm every time.

And, hey, The Queen elegantly and stylishly mowing down opposition figures with machine guns – not to mention Malkovich in a role that actually requires him to be a glorious ham [and catch the film’s joke on that idea when Marvin prepares for action…].

Willis and Parker’s unorthodox romance grounds the film just enough to make the contrasting characters’ styles work – and the rest of the cast is clearly having as much fun as the stars [cameos from Richard Dreyfuss, Heidi Van Palleske, James Remar, Julian McMahon and, especially, Ernest Borgnine all have a zing to them that helps the film maintain its crazy buoyancy].

RED is almost too much fun.