After a very strong pilot, Gotham returns for its second episode and already you can start to see a little pattern forming in the show’s initial formula. It’s too early to tell if this will make the show a little too predictable or not.

The episode opens with Bruce playing with fire, no literally he’s playing with fire. Alfred catches him and gives him a tongue lashing. We meet Doug and Patty an overly old fashioned “nice” couple who gets off on inflicting violence, “Oh fudge.” They tell a bunch of kids that they are from the Mayor’s office for the homeless and offers food. When they start drugging the kids, they shoot a couple of homeless people who try and help.  One kid, Mackey, escapes and Doug throws him through a restaurant window.  Of course Selina (Camren Bicondova) is there to silently witness the entire thing – the girl gets around.

Gordon and Bullock show up and work the case of the dead homeless guy. Gordon yells at the first responder because of his “don’t give a shit attitude” and his sloppy handling of the scene. Bullock agrees with the cop – no one cares about dead homeless people, they have real cases to work on. 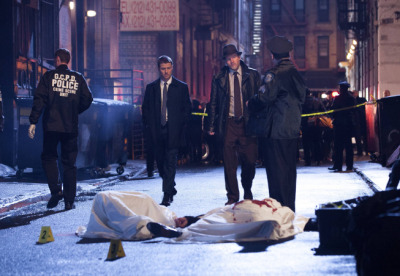 Mackey tells Bullock and Gordon what happened and how he ended up on the restaurant floor. He sees that Bullock doesn’t care and calls him on it. Bullock asks Gordon how he could be so righteous after he killed Cobblepot (Robin Lord Taylor). I get it, Gotham cops don’t care, I don’t need to see a variation of the same speech 5 times in 5 minutes.

Cobblepot makes his way back towards Gotham. He hitches a ride with a couple of drunk college students – didn’t his mother teach him not to get into a car with drunk drivers? He kills them when one of them calls him a Penguin. The name seems to be a trigger point for the young psychotic.

All of this before the opening credits!

Captain Essen (Zabryna Guevara) agrees with Bullock and said she thought “Gordon got with the program,” she tells Gordon that “If you don’t bend you get broke.” Ed discovers that the drug found in Mackey’s system is a rare drug that’s linked to the old Arkham Asylum. The Captain finds this interesting The detectives are told to follow up on the Arkham/Drug collection, but to do it on the downlow. The crime happened on Fish’s turf so the detectives go and talk to her.

Fish and Falcone (John Doman) have a little dinner and he tells her about his conversation with Cobblepot. Carmine mentions how the Wayne’s death leaves a power vacuum and everyone is going to be making moves. He warns Fish not to be one of those people, then sends her a message – by beating her boy toy to a pulp in the restaurant. Montoya interviews Cobblepot’s weird mother (Carol Kane) about her son’s disappearance.

Fish tells Butch that she’s going to kill Falcone with her bare hands and teeth. She then plots to send her own little message to Falcone and wishes that she had made Penguin was still alive so she could have made him suffer more. But first she sends Falcone a little message of her own.

The kidnapped kids wake up in an abandoned room that looks like it belonged on the set of SAW. Jim and Bullock have a conversation with Fish. She tells Jim that she’s said that he’s just a corruptible as everyone else. She tells them that the kids are being shipped overseas – no one knows who the buyer is nor care.

Gordon tells Barbara that he’s frustrated that the police aren’t doing more and they aren’t allowed to go to the press. Barbara tells Jim to call in a tip, after he refuses she does it anyway. After the story hits the papers everyone blames Jim, who swears he didn’t call it in. Jim and Bullock have a conversation about women and Bullock says Jim is a “Monkey riding a racehorse.” Funny mental image!

Doug and Patty go to their supplier for more drugs, but he refuses because they were sloppy. That’s when they tell him the Dollmaker needs those children and he can’t back out of the deal. Gordon and Bullock show up and Patty tries to throw them off the trail. Sensing something is wrong the two detectives get involved in a shootout with Patty and Doug in the pharmacy (again, what Pharmacy looks like an abandoned warehouse straight out of the SAW set?).

We find out this guy was the one holding the kids, why, the show didn’t make entirely clear. I guess it was just a storage place until they get shipped out. The kids are rescued and everyone is happy.  Nice heroes press conference. But this is Gotham, nothing is ever that simple.

Once again Gordon and Bullock are hailed as heroes at the Mayor’s press conference. He tells Gordon that all the kids are being shipped to a prison upstate, which doesn’t sit well with him. But there’s not much he can do about it.  Alfred asks Gordon to come over for tea.

All the kids are loaded onto the bus, including Selina who refuses to tell the cop her name, she asks for Gordon. Yes after a 1 ½ episodes Selina finally talks!  She tells one of the frightened kids that Juvi isn’t so bad and that if you get into a fight go for the eyes. Patty and Doug show up and kidnaps an entire busload of children. The Mayor is livid, because it makes him look bad. How can he explain a hold busload of the little bastards going missing?

Selina escapes the evil duo’s clutches and says the Dollmaker will be pleased with them. One of their guards scream in agony, when they investigate Patty sees that the guy’s eyes are completely gone out – pretty gruesome. She puts the poor bastard out of his misery by putting a bullet in him. Gordon shows up just in time to save Selina from eating a bullet from Patty.

Gordon and Alfred have tea where he talks about Bruce burning and cutting himself. Bruce creeps up on the duo as they talk and Alfred tells him “It’s bloody rude.” Funny. Bruce tells Gordon that he’s testing himself and congratulates him on saving the kid and asks if there’s anything he can do to help. Gordon tells him that money can’t solve everything and the kids need someone who cares for them – which he has and should appreciate more. Bruce offers to buy the kids clothes.

The kids are still going to be sent upstate. Selina insists she has a mom somewhere and demands to see Gordon. When the cop refuses she says she’ll let everyone know that he touched her. Cobblepot kidnaps someone and tells the victims mother he’ll kill him if he doesn’t get money. After hanging up on him Cobblepot is kills the guy.

Another solid episode, but there were some gaps in the procedural aspects. I really love what they are doing with Selina and really curious to see where they go with this character – especially long term. I just loathe Ed, terrible actor and he’s not helped by being poorly written. He’s only on camera for a minute or two but he leaves a lasting impact – not at all a good one. Fish is a solid character, but I’ve never been a fan of JPS – she can be a little bit grating.

Who is the Dollmaker? What’s going to happen with Selina, Gordon and the Wayne investigation?