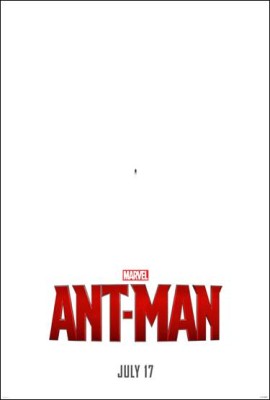 Since no one has been able to replicate the super-soldier serum that gave Steve Rogers his enhanced abilities, Henry Pym took a different tack – he wondered if he could find a way to shrink a human being to ant size without sacrificing that person’s strength.

Imagine the force of a human-sized punch thrown by an any-sized person – all that force concentrated in a tiny impact zone. That would definitely leave a mark

A fringe benefit might be that our ‘Ant-Man’ could infiltrate the most secure locations. And what if, Pym wondered, ‘that person could communicate with ants? He’d have a ready-built army at his disposal. Ant-Man doesn’t sound so silly now, does it?

The next evolution of the Marvel Cinematic Universe brings a founding member of The Avengers to the big screen for the first time with Marvel Studios’ “Ant-Man.” Armed with the astonishing ability to shrink in scale but increase in strength, master thief Scott Lang must embrace his inner-hero and help his mentor, Dr. Hank Pym, protect the secret behind his spectacular Ant-Man suit from a new generation of towering threats. Against seemingly insurmountable obstacles, Pym and Lang must plan and pull off a heist that will save the world.

The next evolution of the Marvel Cinematic Universe brings a founding member of The Avengers to the big screen for the first time with Marvel Studios’ “Ant-Man” when master thief Scott Lang must embrace his inner-hero and help his mentor, Dr. Hank Pym, protect the secret behind his spectacular Ant-Man suit from a new generation of towering threats.