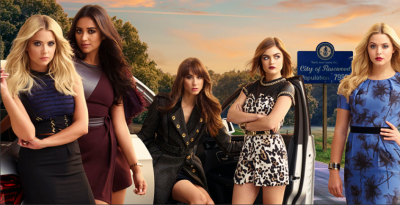 The finale of Pretty Little Liars, “Hush…Hush, Sweet Liars” is just two weeks away, airing on March 15 at 8 PM, and you simply won’t want to miss it! The series is based on the similarly titled book series by Sara Shepard. As PLL nears its end, viewers can only expect things to get crazier than they already are. Of course, what would you expect from a show that is often described as “Desperate Housewives for teens?”

In this season, time has jumped to accommodate for the series end and the liars are a more mature bunch. They are beginning to have more stable relationships or at least they are seeing them head towards marriage. In short, the liars are growing up. That said, they still have A on their tail, and they are closer than ever to finding out who the person is who has been trying to ruin their lives for all these years.

If you don’t have cable and you’re a fan of Pretty Little Liars, the fact that it’s on Freeform (formerly ABC Family) might give you a bit of a headache. The good news is that thanks to the cable-cutting revolution there are more ways than ever to watch Pretty Little Liars, and many other shows, without cable. You won’t have any problem watching the season finale legally because there are so many options available out there. You can even choose between live streaming along with the show or opting for day-after on-demand viewing. Essentially, you have more options than you had with cable, but all of them end up costing less.

So, where do you go to watch Pretty Little Liars? The following sites and services will allow you access to PLL with no headaches, and since most of them offer free trials, you might just end up watching the finale for free.

This is your best option especially if you want to watch it free. Sling TV allows you to watch Freeform shows at the same time as they air on television. Also, they have a free 7-day trial, so if you sign up a few days before the finale, you can watch the show completely free! It’s also worth noting that as a cord-cutting family, this has kept my teenage daughter satisfied because she hasn’t had to miss a PLL episode all season!

If you don’t want to go with the live stream option, there are several pay-per-episode sites and services. These are great because you can watch them on a wide variety of devices, and they are generally inexpensive, topping out at a few bucks an episode, though it’s cheaper if you buy a season pass. The cheapest options out there tend to be Amazon Instant Video, Vudu, or Mgo, though options such as iTunes and Google Play also exist, but tend to cost more.

Hulu & Netflix also have a huge selection of Pretty Little Liars episodes. They won’t be any help with watching the season finale though, because all of the episodes tend to be older, up to the last season, but nothing recent enough to catch you up this season or to watch the final episode when it airs in two weeks. That said, if you’re new to PLL, either of these options would get you through a number of the seasons with ease.

So, if you’re gearing up for the finale, your best option to watch it legally without cable would be a live-streaming service like Sling TV. That way you can watch it live as it airs, and you don’t have to worry about spoilers on Twitter or wherever else. And if you’re a hug fan, you’ll probably also want to check out Freeform’s fan site!