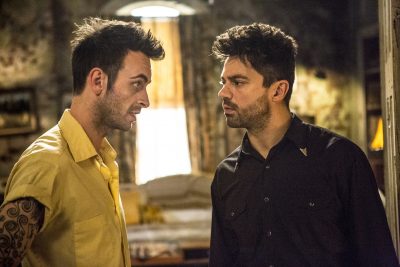 Viktor is both the name of this week’s episode and the name of the man who Tulip had run away from – and no one in his employee is thrilled to see her again. Not only that, but Viktor (Paul Ben-Simon (Daredevil, Invisible Man) is not satisfied with a mere apology for her leaving.

Even his (their?) daughter  is mad at her.

Meanwhile, at Denis’ (Ronald Guttman, All My Children, Heroes) place, Cassidy spots a very familiar face (Mark Harelik, Awake, Getting On) in a Katrina infomercial hosted by Frankie Muniz (himself) and alerts Jesse – and in Hell, Eugene meets Adolph Hitler (Noah Taylor). 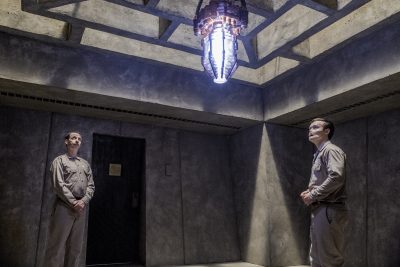 Last week we saw Eugene’s worst memory playing on eternal repeat – that’s what Preacher’s Hell is – being forced to relive your worst memory over and over forever. This week we get a look at part of Hitler’s – not enough for Eugene to figure out why it’s his worst memory, but enough for a lot of viewers to do so.

It makes Hitler almost (almost!) sympathetic – even after he admits his actions to Eugene – and it’s no surprise to learn that Hitler isn’t the biggest bully in Hell (but it is a surprise who that is!).

Another intriguing thing about Hell is that it’s mechanized – its inmates’ memories are playing by a machine that, from time to time, breaks down (Hell is underfunded!) and the warden (Amy Hill) of Eugene’s block and she makes Suicide Squad’s Amanda Waller look like a pussycat! 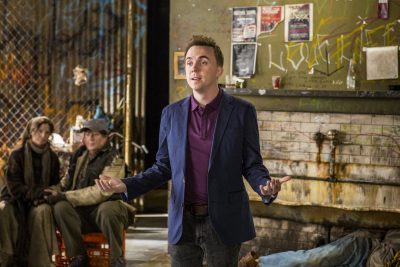 The Tulip arc introduces us, as mentioned above, to Viktor – who is not at all happy with her. Throughout Viktor’s mansion are scattered numerous thugs of varying degrees of scariness and one who is his prime interrogator (Sean Boyd, Jack Reacher: Never Go Back) – a large, businesslike guy who dresses for success and likes to listen music as he works.

Despite Jesse’s eventual knock down drag ‘em out with the interrogator, the biggest surprises of the episode involve Fake God (how he became Fake God is a truly chilling plot point) and the revelation of who Viktor really is.

Viktor is a unique episode in what is a genuinely unique show – it mixes high drama and low humor with melodrama and flashes of wit in perfectly odd places. It’s most blasphemous you’ll have all week – and we still have 137 jazz clubs to go!