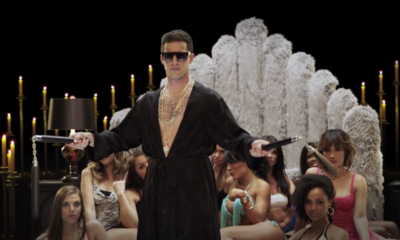 The Lonely Island boys (Andy Samberg, Akiva Schaffer and Jorma Taccone) are one for one in their budding movie careers(s). Popstar: Never Stop Stopping isn’t so much Spinal Tap for the 21st Century as it is Spinal Tap for the Viral Age.

Popstar is the story of a Conner4Real – who has become the world’s top pop star following the breakup of the hip hop trio, Style Boys, a group consisting of Conner and his best friends since they were tykes, Owen and Laurence. Having just destroyed the world with his first solo album, he is totally unprepared for his second to be received poorly and goes off the rails.

Written by Samberg, Schaffer and Taccone – and directed by Schaffer and Taccone – Popstar is allowed to be knowing and satirical largely because its mockumentary format allows for real industry giants (from Mariah Carey and Ring Starr to Nas and Questlove) to talk about Conner’s impact on the music world (and his later failure).

At its heart, the film is about three friends who parted on bad terms because one of had a humongous ego problem – and how they their back to each other.

Conner (Samberg), Owen (Taccone) and Lawrence (Schaffer) were a hit as Style Boys because they each brought something to band: Lawrence wrote the lyrics; Owen had the beats, and Conner was the show-stopping performer.

They broke up over the legendary Catch Phrase Verse that Conner performed as a guest on another artist’s song. Conner refused to give Lawrence the writing credit and poof! One broken band.

With his first solo album Conner got so big that he now had an entourage of more than 30 people – one of whom was his Perspective Manipulator (a shorter guy who stood next to Conner in photos to make him look taller). 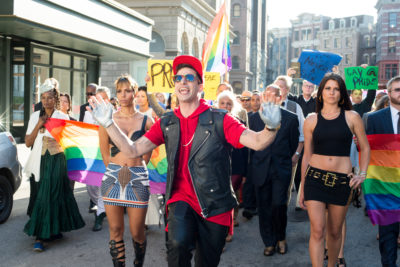 Then his follow up album tanks – with songs like ‘#$@+ Me Like Bin Laden’ it’s no wonder his tour needs a shot in the arm. But when his opening act suddenly gets more attention than him, he becomes the original tantrum boy and not even his engagement to Ashley Wednesday (Imogen Poots) can save him. And then she leaves him for Seal (which ties in another earlier, hysterical scene in which he proposes while Seal sings…).

There are at two gags which are Bieber specific (one involving the Anne Frank House), but Popstar skewers popstars in general – at least the ones who were nice guys when they started out and turned into jerks once they hit it big.

Some of the best cameos are by Ringo Starr and Mariah Carey, who just nail them and one of the best non-Lonely Island performances comes from Sarah Silverman as his very on-point (and hilariously honest) publicity agent, Paula – who admits on camera that she works for Conner because his has that special something… that makes people give him their money!

Chris Redd steals his scenes as Conner’s new opening act, Hunter the Hungry – a filter free rapper whom Questlove declares to be the Next Big Thing.

The big moments, though, is the lampooning of Lady Gaga’s on stage costume changing routines. It makes fun of the extreme performance required will simultaneously acknowledging just how hard it is to pull off – and it results in the pivotal gag that hastens Conner’s downward spiral.

You don’t have to know all that much about the music industry to enjoy Popstar: Never Stop Stopping – but if you do, you might just hurt yourself laughing.