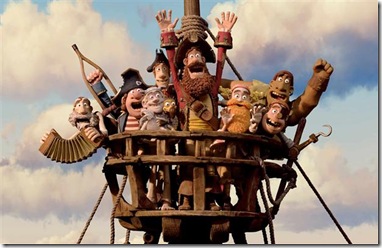 Pirates! Band of Misfits is the best stop-motion, non-Wallace and Gromit film yet from Aardman Animation. It may also be the most complex stop-motion animated film ever. And yes, it’s funny. Very, very funny.

Pirate Captain [voiced by Hugh Grant] is the leader of the ragtaggiest of ragtag crews – sailors with names like The Albino Pirate [Anton Yelchin], The Pirate With Gout [Brendan Gleeson], The Pirate Who Likes Sunsets and Kittens [Al Roker] and The Strangely Curvaceous Pirate [Ashley Jensen] – and owner of the fattest, homeliest parrot ever, Polly [she’s just big-boned…]. Of his crew, the most effective is his second in command, Number 2 [Martin Freeman], whose patience is a true marvel.

The plot of The Pirates! Band of Misfits is simple: Pirate Captain wants to win the Pirate of the Year Award – in spite of failing for fifteen years in a row [he once won for Best Anecdote About A Squid] – and will go to any length to win. The problem is that the competition is fierce – Cutlass Liz [Salma Hayek] and perennial winner Black Bellamy [Jeremy Piven] are far more likely to win.

There’s a montage of would-be victims who turn out to be plunder-free, pushing Pirate Captain to extremes after he encounters Charles Darwin on one of his many failed attempts. Darwin gives him hope by noting that Polly might actually be something special – but in order to capitalize, they will have to survive scrutiny by scientists while avoiding Queen Victoria [Imelda Staunton] who hates pirates [no, really – it’s emblazoned on her coat-of-arms!].

The Pirates is filled with all manner of lunacy ranging from the slapstick [some of the piratical attacks on potential victims] to the nuanced [a sign listing the ship’s rules has, as number one, ‘The Captain is always right’ – and a sign outside a pub reads ‘Live Sports! Urchin Throwing! Cockney Baiting!’].

Given the most staggeringly detailed sets, a plot that lends itself to the kind of dry, witty humor in which Aardman specializes and given the boundless imagination of Aardman’s talent [behind and before the camera], it just makes sense that the studio’s high quality nonsense should elevate this tale to Monty Pythonesque heights.

Gideon Defoe’s script persuades us to cheer for a pirate captain and despise one of the greatest monarchs in history. Dafoe piles conceit upon conceit in such a way as to make a formally dressed chimpanzee that communicates with flash cards feel no more ridiculous than the best about being a pirate being Ham Night. In other words, we are talking staggering heights of craziness made not only acceptable, but necessary.

Peter Lord and Jeff Newitt have directed Pirates! Band of Misfits with an eye to providing big laughs for all ages – and a great many bleep-eating grins. Pirates! It’s beautifully paced and filled with surprising character beats and much understated glee [Pirate Captain’s crew are masters of disguise, but it’s the kind of disguises that provoke laughter].

Stop-motion animation is a perfect medium for 3D. The characters and sets are so detailed that the 3D draws us into the settings as easily as if it were live-action. Indeed, the 3D makes the detail so noticeable that it’s hard to not want to see the movie several times just to see what we’ve missed the first time.

Overall then, Pirates! Band of Misfits is more fun than an ocean full of booty.