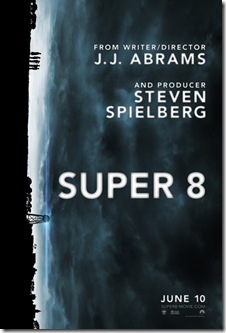 SUPER 8, from writer/director J.J. Abrams and producer Steven Spielberg, will open exclusively tomorrow, June 9th, on over 300 screens nationwide, featuring all 239 IMAX playdates in the U.S. and Canada.  Fans can go to www.Twitter.com/Super8Movie <http://www.Twitter.com/Super8Movie> and use #Super8Secret to share information about the movie with friends. To be among the first to see SUPER 8, visit www.Super8-Movie.com/Sneak <http://www.Super8-Movie.com/Sneak> for tickets and show times.

“With SUPER 8, J.J. and Steven have created a really fun and engaging movie for all ages,” said Rob Moore, Vice Chairman of Paramount Pictures. “We are excited to finally get it out into the marketplace and using this sneak preview promotion with Twitter to kick start the film’s release, is an unprecedented way to get people into theaters and talking about the movie.”

"Twitter is how we hear about new movies and share our tiny reviews before the credits finish rolling," said Biz Stone, Twitter cofounder. "There are already millions of people talking about SUPER 8 on Twitter and Paramount gets that. Creating more excitement about the film with sneak previews and free popcorn is a smart way to make this film a global conversation even before it’s released."

“Twitter has the incredible capability of spreading buzz in real-time, as well as fostering communal conversations that encapsulate large audiences in a matter of seconds. We believe these elements are key in promoting a movie like SUPER 8 that has such incredible playability and the potential for unlimited positive word of mouth,” said Amy Powell, Paramount’s Executive Vice President, Interactive Marketing Strategies & Film Production.

SUPER 8 is an Amblin Entertainment / Bad Robot production, directed by Abrams from his original script and produced by Steven Spielberg, Abrams and Bryan Burk.  The film stars Kyle Chandler, Elle Fanning, Joel Courtney, Gabriel Basso, Noah Emmerich, Ron Eldard, Riley Griffiths, Ryan Lee and Zach Mills. The movie takes place in the summer of 1979, where a group of friends in a small Ohio town witness a catastrophic train crash while making a super 8 movie and soon suspect that it was not an accident. Shortly after, unusual disappearances and inexplicable events begin to take place in town, and the local Deputy tries to uncover the truth – something more terrifying than any of them could have imagined.