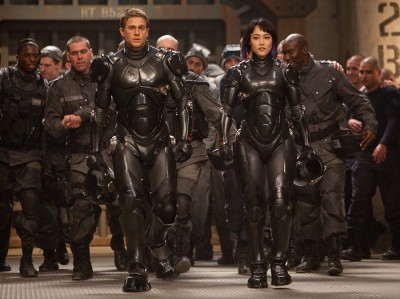 When a prologue is done well, it can add a lot of texture and context to the story you are about to see or read. While I strongly dislike the Lord of the Rings films, the beginning five-minute prologue sequence does an amazing job of setting up and getting us excited about the world we’re entering. A bad prologue just makes you feel like you’ve watched the entire movie before it even begins. No matter what happens after, you are bored by the entire experience.  Pacific Rim had a 20-minute pre-credit sequence that told the entire history of the human’s war with unknown monsters from the deep. It was exhausting and by the end of it, felt like I’d just watched the entire movie.

It suffers from incessant and annoying voice over work by the new “it” man Idris Elba who plays commander Stacker Pentecost.  His voice doesn’t have the power to command your attention and as much as I love the guy, he doesn’t have the “presence” to hold a summer blockbuster together.  It doesn’t help that he is saddled with a director who clearly has no interest in character building.

Right from the start you know writer/director Guillermo del Toro is primarily interested in big gigantic monster vs. robot fights and that’s perfectly fine. It is what you sign up for when you see a movie like this. Del Toro delivers the big CGI infused action in spades, the problem is when you don’t care about the actors and there’s no characterization to the monsters the entire exercise starts to feel pretty monotonous.

The movie’s main drawing power is also its strongest weakness. Del Toro knows what the audience wants to see, but he doesn’t build to it, or make us earn it. You want fights, oh we’ll give them to you! There’s a gigantic repetitive battle almost every ten minutes. Not to mention they are all filmed, framed and staged pretty much the same. There was a moment midway through the movie where they clearly ran out of ideas and said, “screw it, we’re Voltron, let’s use a gigantic sword and fly through ‘space’.” While it looked pretty cool to see on the big screen, the obvious question is, why didn’t they use the Sword earlier in the movie and it is never seen again.

Can we please get rid of 3D? I’m not going to say the 3D iMax version of this movie is “terrible” but after awhile it did start to give me a headache and the added darkness of the 3D glasses doesn’t do much to improve an already darkly lit film. While there were a few moments of wow, this is absolutely amazing there were far more that made the entire affect seem fairly pointless. I’m sure this movie will look much better on 3D Blu-ray than in the theaters, but man was it dark. 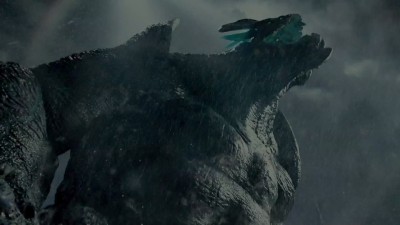 You notice I spent over 500 words talking about fights and cgi but not the plot or characters? That is because there really isn’t much of either.  Structurally the movie tells its story in an straightforward A – Z format but it includes some weird, useless time jumps.  After we get the prologue we’re introduced to “hot headed” robot jockey Chuck Hansen (Robert Kazinsky) and his brother who is swiftly killed off after disobeying a direct order.

What was the order? Ignore people caught in the crossfire of their fight. What is it with this summer’s crop of films where the “hero” is not supposed to care about collateral damage and protecting people who are in the wrong place? This movie is all about destruction on a grand scale with little care paid to lives lost or potentially lost. Ok, they give lip service to 10 lives vs. 10 million, but still.  The amount of destruction on display was out of control – which you’d expect if giant monsters descended on a major city.

So Hansen is haunted and after a 5 year hiatus is called by into action because the human race is in its last few weeks. There are several weird, nonsensical time jumps in this movie.  He doesn’t want to partner up with anyone else because in order to control the robots you have to mentally linked and compatible with your partner. He meets Mako Moiri (played by Rinko Kikuchi) and the sparks fly.

I’ve always wanted to see a Hollywood style, big budget Japanese monster movie done right. While one can appreciate the idea that Pacific Rim is an “original” bit of IP, I kept thinking, “How much cooler would this have been if it was Voltron, Godzilla, Ultraman, or Johnny Sokko?” Then I would have some positive pre-defined feelings for the material. Instead this movie felt cold, technical, and paint by the numbers.