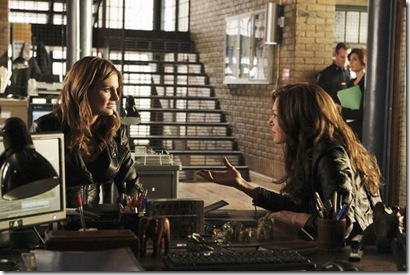 As ‘Nikki Heat’ begins, Castle [Nathan Fillion] is watching Natalie Rhodes’ [Laura Prepon] audition tape for the title role in the movie ‘Nikki Heat.’ He is appalled, but his daughter, Alexis [Molly Quinn], thinks the news is wonderful – she loved Rhodes’ last movie, a horror movie she shouldn’t have old enough to see. Castle’s mother, Martha [Susan Sullivan] notes that Rhodes is alleged to have spent a week in a crawlspace for the movie, Hell’s Crawlspace – ‘that’s dedication to her craft.’

Before he gets too bent out of shape, Castle is called to a murder scene – to discover that Rhodes is at the scene, and will be shadowing Beckett to learn everything she can about the woman who was the model for the character. Now, he’s really appalled – but everyone else is in awe… especially Detective Kevin Ryan [Seamus Dever], who has her on his ‘exception list’ [the list of five celebrities he would get a free pass to sleep with if he got the chance]. This interferes, somewhat, with his efforts to propose to his girlfriend, Jennifer [Juliana Dever].

The victim is a high-end matchmaker, Stacy Collins, who was killed not long after leaving a surprise party held in her honor by her happily married clientele. Potential directions for the investigation to go include: her ex-boyfriend [they broke up, very loudly, the morning before the party]; the husband of one of Collins’ clients who filed for divorce because of infidelity, negating the pre-nup that she had signed, and an ex-con turned private eye who mysteriously vanishes as the investigation gets underway.

‘Nikki Heat’ is about average for an episode of Castle. It’s smart, funny and plays its carefully marshaled moments of drama to full effect. Writer David Grae has a lot of fun with Rhodes’ transformation into Beckett/Heat, playing the change for a sly creepiness [Rhodes is very Method] as Castle finds himself working on a case with, effectively, two Becketts! Grae also has fun with a little white lie Ryan tells in order to ask Jennifer’s parents for her hand – a little white lie that gets complicated when his partner, Esposito [Jon Huertas] isn’t let in on it in advance.

Of course, the cleverest script won’t fly without good direction, and Jeff Bleckner makes sure that everyone delivers the promise that’s on the page. The result is that ‘Nikki Heat’ hits all the right beats [in some cases, twice!] and flows beautifully. It’s episodes like this that have enabled Castle to grow its audience, year after year.