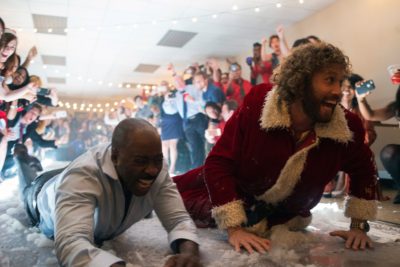 We open with Josh Parker (Bateman) signing the papers that make his divorce final in the offices of his lawyer – where they’re having a boring Christmas breakfast (because no one gets drunk before noon it’s more efficient) – and then trundling sadly to work.

At the Chicago branch of Zenotek Data Storage, we meet various employees including head of R&D, Tracy Hughes (Nunn), head of HR, Mary Winetoss (McKinnon), and the repulsive Jeremy (Rob Corddry). Josh’s boss, Clay Vanstone (Miller), is stoked for this year’s Christmas party because it’s been a hard year – his father died and his sister, Carol (Jennifer Aniston) was made interim CEO. 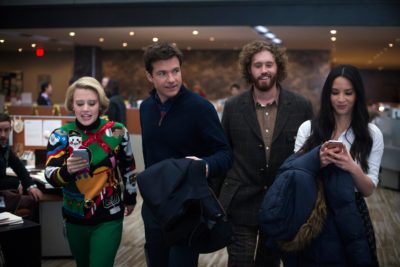 Carol has other plans – in a surprise visit, she informs Clay and Josh that their branch will be shut down at worst or face 40% layoffs at best. So much for the party – and everyone’s bonuses!

She does give them an out – if they can close a $14 million deal with Walter Davis (Courtney B. Vance), their jobs will be saved – but she’s firm on the no party idea.

After she leaves to jet off to New York (but not before she offers Josh a job in New York at twice the salary) – her no party order is roundly ignored when it turns out that it might just be the perfect way to get the Davis account.

So, if we weld a bit of Horrible Bosses onto a bit of The Night Before and throw in a dash of every other crude Christmas comedy ever made, we get Office Christmas Party.

There’s the obvious woulda, shoulda, coulda office romance between Josh and Tracey; there’s the tech nerd who hires an escort to prove he really has a hot girlfriend; Jeremy goes from office creep to party animal; Mary goes from enforcing rules to breaking them, etc. 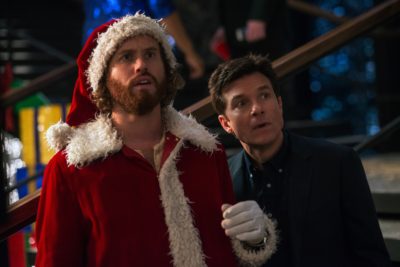 There’s the inevitable crisis and not the least bit surprising way out; there’s a reconnection between the dysfunctional siblings and the equally inevitable twist about Walter Davis. Even having a surprise guest at the party is more or less predictable (though it’s a good choice for a Chicago party).

Most of the laughs come from the escort’s boss (Chloe Wepper) – a woman with mood swings on a dime, and a gun. The rest come from McKinnon (surprise!).

There are no great lines; no great physical gags that aren’t somehow mean-spirited. The heart comes from Clay’s secretary, Trina (Jillian Bell) – and there’s just not enough of her to swing the film into the positive.

Office Christmas Party plods for the first half then goes manic for the second. There’s real sense of pacing or timing. The result is a movie that never achieves liftoff.

I think I’m going to dig out The Ref to get back into the real Christmas spirit.