JUNE 9th 2009: Warner Brothers is releasing the Clint Eastwood movie Gran Torino The Widescreen Edition onto DVD, ON DEMAND and for download via cable/satellite providers and iTunes. Gran Torino marked the first return to filmmaking for venerable actor Clint Eastwood since his Oscar winning film Million Dollar Baby. I liked this movie when it came out in theaters and my opinion of this movie has not changed. It’s no clunker, it’s Eastwood at his finest. 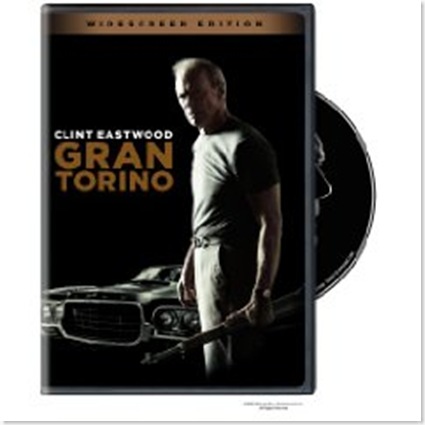 In Gran Torino, Clint Eastwood plays the recently widowed and retired auto worker, Walt Kawalski.  Kawalski is also a man who is deeply set in his own ways and coldly distant from his two sons and their families. The kind of man who keeps his M-1 rifle cleaned and ready for action to defend what he clearly knows is his and unquestionably believes is right.

Kawalski, an embittered Korean war veteran with a deep distrust and dislike for Asian people finds himself dealing with unwelcome changes in his neighborhood in the form of Vietnamese families moving into his once solidly Caucasian world. As Gran Torino unfolds Walt Kowalski rescues his next door neighbor a young Hmong girl named Sue Lor (Ahney Her) and as he  finds himself becoming friends with the spunky, outspoken young girl, Walt also finds himself at first very begrudgingly taking on the task of reforming her teenaged brother Thao Vang Lor (Bee Vang), who tried to steal Kowalski’s prized possession: his 1972 Gran Torino.

From the opening scenes of Walt and his family at the funeral for Mrs. Kawalski to Walt’s final and dramatic scenes on screen, Eastwood delivers a solid performance and bring a a believability to the character that pulls the audience into the story with ease. Pretty much everyone knows a guy like Walt Kawalski and that familiarity embodied in the equally familiar form of the laconic and soft spoken Clint Eastwood makes it all fall into place. The onscreen chemistry between Eastwood and these two young actors is part of what makes Gran Torino become such a compelling and driving force of a movie. Kawalski’s journey of self discovery and widened sense of the world around him is embodied in the friendships he makes with them and their family.  Gran Torino, which was written by Nick Shenck from a screenplay by Dave Johannson, is filled with real people and with the gritty realism that comes from the world of everyday hard working middle class people, not from some smaltzy heroics or preachy zenlike characters.

Gran Torino is a solid ride for anyone looking for something with ‘meat and potatoes’ to it.

On the down side to what I consider a DVD worth spending money on is, even though I am a woman who is in love with muscle and sports cars, I found the special features offered on the DVD to be a bit lacking for the general audience. Both special features, Manning the Wheel: The Meaning of Manhood as Reflected in American Car Culture and Gran Torino: More than a Car, are decidedly geared towards male audiences.

Gran Torino is Rated R for adult content, language and situations and is available on DVD at Warner Brothers Home Video.