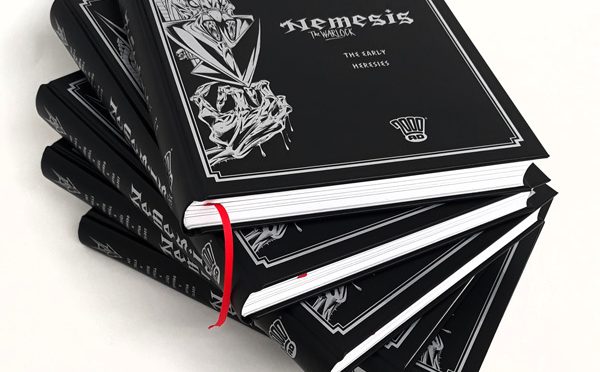 Exclusive to the 2000 AD webshop and developed in conjunction with 2000 AD’s licensed publisher in France, Delirium, this hardcover edition of The Complete Nemesis the Warlock perfectly showcases the ground-breaking writing of Pat Mills and the stunning art by Kevin O’Neill, Jesus Redondo, and Bryan Talbot.

There are only 250 English language copies of this limited edition English-language hardcover edition. Larger than previous paperback editions at 210mm x 280mm, it also features a 16-page colour cover and Star Scan gallery.

Nemesis the Warlock is one of 2000 AD’s most popular characters, an alien freedom fighter battling against the xenophobic genocide perpetrated by Torquemada, the diabolically evil leader of a human race that has retreated into vast caverns beneath the surface of the Earth, now renamed Termight. Intent on purging all alien life from the galaxy and punishing ‘deviants’, Torquemada’s sinister motto – “Be pure! Be vigilant! Behave!” is one of the most recognisable slogans in comics and the strip, thanks to Mills’ mind-blowing inventiveness and O’Neill’s incredible art, continues to have a huge influence on comics even to this day.