The story is a watered down version of the novel – fourteen-year old Susie Salmon [Saoirse Ronan] narrates the story of her death; how it affected the lives of her family, and that of the man who killed her. Ronan is an actor of extraordinary range and depth and she does a lovely job as Susie. The problem comes when we leave the world of her family and killer – an oddly muted world that reflects the loss of the family and the fears of her killer – and see Susie in a place referred to as the in-between, where, instead of being a starkly beautiful place, it’s a riotous blast of psychedelic CG. Very distracting and mood killing. In a movie that relies on setting a haunting mood, that’s pretty much pretty much ruinous. Another problem is Susan Sarandon’s character, the alcoholic Grandma Lynn, who belongs a different, campier movie. 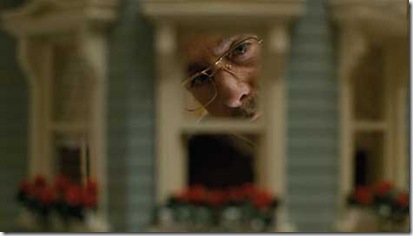 It’s too bad that several really good performances are left hanging because of the two killer flaws. Mark Wahlberg creates a very believable loving father, Jack, who refuses to quit trying to find his daughter’s killer; Rachel Weisz [who is, apparently, incapable of giving a poor performance] is very effective as Susie’s mother, Abigail, whose grief forces her to flee; Rose McIver, Susie’s sister Lindsey, who slowly begins to suspect a neighbor of being her sister’s killer, and Stanley Tucci, as George Harvey, the tightly wound – but very average-seeming – murderer.

I have no quibbles with Jackson’s pacing, and most of his shots in the “real” world are spot on. The problem that arises from all the overdone CG in the in-between is that it lessens the impact of what’s happening in the lives of Susie’s family and the unravelling of George Harvey. In combination with Sarandon’s camped up grandma the result is an unbalanced film. Even this sanitized version of the story [a more faithful film would likely have been rated R, but that might have meant a smaller audience] could have worked if Jackson had restrained his impulse to muck about with CGI and paid more attention to making all the characters fit the story.

Instead, we have a film that is lush when it should be stark; stark when it could be even darker and inconsistent in that at least one character belongs in an entirely different movie. In the end, five really good performances are so undermined by the film’s flaws that they can’t – quite – salvage it.