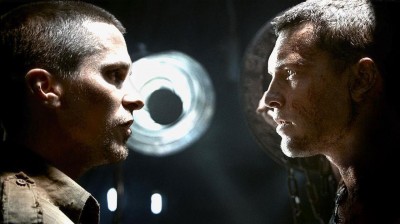 By the year 2018, the war between man and machines will be full throttle (no McG pun intended). As the humans band together and form the resistance, one of their foremost leaders is John Connor, a man who has been fighting in this war since before he was born. This is where Terminator Salvation, the fourth installment of the franchise, launches from.

The reviews for this movie are going to be incredibly polarized. Some are going to enjoy it immensely while others will decry it for ruining James Cameron’s science fiction classics. I’ve already an amazing amount of articles saying it’s the worst movie ever, and others that talk about how well crafted it is.

I viewed Terminator Salvation with an unusual metric by which to judge it: would Mike Troilo like it? Mike Troilo is in fact my older brother, but he represents the demographic that built this franchise. He’s a self-proclaimed child of the 80’s who marveled wide-eyed at the first Terminator, was first in line for T2 and found Rise of the Machines an unnecessary and forgettable addendum to the series. He could probably, if you asked him to, recite most of the first two movies line for line, and considers them as many do pinnacles of great science fiction and action entertainment.

At the end of the day, “Mike Troilo” would like Terminator Salvation. Maybe not love, but certainly like, and definitely enjoy.

Let’s clear this up first, this isn’t Terminator 2: Judgment Day. Anyone trying to compare Salvation to T2 is simply placing the bar way too high. There are certain films where everything clicked just right, and Terminator 2 is one of those films. No matter how hard you try, that type of magic rarely, if ever, replicates.

There’s a lot though in Terminator Salvation which is great, especially two specific roles.  Anton Yelchin as a young Kyle Reese is exceptional. He understands Reese perfectly and has just right level of young innocence and hero. Yelchin’s having a pretty good year considering he also stars in Star Trek. It’s Sam Worthington’s character however who steals the show, and that’s impressive when you’re playing opposite Christian Bale. His performance has an unusual amount of depth and he’s great to watch in the action sequences.

On that note, the action is top notch. The special effects for the machines in T4 make the Transformers movie look laughable. The good decision made here was to slow things down a little bit, and put most of the exciting sequences in daylight or well lit locations. It’s much easier to follow what’s going on, and the action is both riveting and innovative. This is the kind of stuff you want to see on the big screen with the technology available to us today. Watching these machines is chilling and awesome at the same time.

Which brings us to the plot, and here’s where the critics will divide sharply. Let’s get the bad out of the way first. Christian Bale’s John Connor is boring. All of his motivations, his speeches and most of his actions are misfires. He’s just not John Connor, at least how the character has been developed so far. And because Connor feels weak, the central plot feels a little weak. There are gaping plot holes. There are overly awkward dramatic moments. There are unexplained actions by many of the characters, and these are the items which many will call foul upon. All of these things however,  in some way, don’t do enough to damage this movie enough that I can’t still recommend it.

You see, director McG loves the Terminator movies. He, like my brother, has watched the first two movies over and over, and it shows. There are subtle details that make this movie fit into the Terminator universe in a great, entertaining way. There is a “wow” moment that is almost worth the price of admission. There are pieces of classic dialogue cleverly worked into the script, bearing homage to the original movies. Even certain scenes are recreated frame for frame if you watch carefully. These are the types of things I have to award major points to, and the things that made me smile through the entire movie- the care, respect and attention to detail that so clearly went into making this.

There are a lot of flaws to Terminator Salvation, but there so much fun in it as well that audiences should be at least curious to see where this story goes next.  I think the criticisms are valid, but I believe it’s because this movie isn’t meant to stand alone. This fourth movie needs its predecessors and eventual sequels to support it, and it this is concept which could put off many viewers. With that in mind, remember that this is a true sequel and in trying to watch Salvation without knowledge of at least the first Terminator movie (if not the second as well), you might find yourself a little lost.

Plain and simple, I think this is a great recipe for a summer popcorn flick. Terminator Salvation is fun, exciting, has great music and incredible special effects and action. For fans of the Terminator series, definitely go see this, but with an open mind.