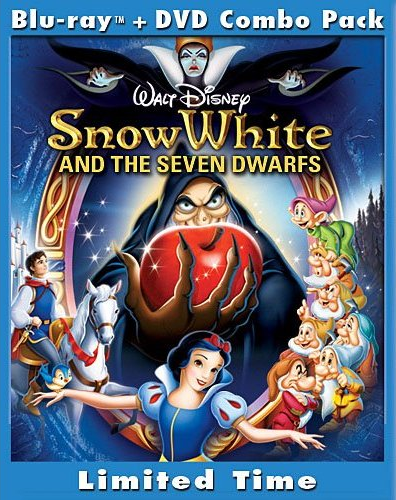 I love Disney Blu-rays, the folks at Disney Home Video really know how to make their stuff shine in this format, so I’m looking forward to seeing what they do with one of their premiere titles Snow White and the Seven Dwarfs, which comes to Blu-ray, October 6.  The 2 disc special edition will be packed with hours of extra features and include a DVD Copy of the movie. Personally I prefer having a Digital copy on my Laptop to having yet another Disc that I have to deal with.  The full press release is after the break.

The one that started it all…

Burbank, Calif., May 18, 2009 – Walt Disney Studios Home Entertainment (WDSHE) proudly opens the vault, releasing ‘The One That Started It All,’ Snow White and the Seven Dwarfs, in high-definition Blu-ray for the first time ever, on October 6, 2009.  The historic and highly-anticipated release fittingly launches a spectacular all-new product line – Disney’s Diamond Collection.  Poised to transform home entertainment, just as the movie itself transformed the entire motion-picture industry upon its debut in 1937, the revolutionary new Diamond Collection brings audiences the most immersive and highest-level viewing experience, that includes unparalleled features, exclusive high definition content and updatable experiences, superior picture and sound, and much, much more.  Taking home entertainment to fantastic new heights unlike anything before, Snow White and the Seven Dwarfs: Diamond Edition marks the film’s first-ever high-definition Blu-ray bow, on October 6, while the standard definition will be released seven weeks later, on November 24.

The Diamond Collection debut of Snow White and the Seven Dwarfs will keep audiences spellbound for hours with exciting content exclusive to this historic release, presented with spectacular newly restored picture and 7.1 Digital Theater System Hi-Def Surround Sound.  Utilizing the latest in technology, possible only by the power of Blu-ray, the release includes “Disney Smart Navigation,” allowing the magic and personality of Disney Characters to come to life as never before.  “Disney Family Play”, the ultimate interactive Hi-Def experience, offers a variety of immersive games, activities and unprecedented levels of personalization and customization features, to transform how families experience home entertainment together. The Snow White and the Seven Dwarfs: Diamond Edition is a Blu-ray + DVD Combo Pack (2 Blu-ray discs + DVD).

* Hyperion Studios – Audiences are digitally transported to 1937 to discover first-hand, Hyperion Studios, the original studio Walt Disney himself built and where Snow White and the Seven Dwarfs was conceived and developed.  Viewers will virtually walk the halls of this historic landmark experiencing life at Hyperion Studios back in the 1930’s. This amazing “Backstage Disney” feature contains newly dimensionalized archival photos, never- before- heard animator recordings, archival transcripts and rare footage of Walt himself revealing how Disney’s gifted filmmakers crafted the very first animated feature.

* Magic Mirror – Using the latest in Blu-ray technology, the iconic Magic Mirror guides the audience through the Snow White and the Seven Dwarfs Diamond Edition features with ease, serving as the “host” for an incredibly immersive experience. The Mirror will recognize viewing patterns, knows where the audience has left off and will even suggest where to navigate next. This marks the first use of this type of technology in a Disney Blu-ray release and provides viewers the control to personally create a customized Snow White experience.

* DisneyView – Disney’s pioneering animated feature is brought to the modern era of widescreen high definition viewing by allowing the user to expand their viewing experience beyond the original aspect ratio of the film.  Utilizing Disney Blu-ray™ technology, acclaimed Disney artist Toby Bluth was able to ‘draw’ beyond the borders of classic full frame cinema and fill the otherwise dark edges of the screen with beautiful custom imagery, giving audiences a new view of their animated classic favorite.

* About Toby Bluth – Disney artist Toby Bluth tells how the movie inspired him to create the superb DisneyView art.

* Mirror, Mirror On The Wall – Through BD-Live, this mirror can find the secret princess inside each viewer  with a series of questions, then create for them a personal message from their favorite princess who will call them on the telephone.

* What Do You See? – To win this exciting interactive game, players must untangle scrambled images.

* Jewel Jumble – Players put jewels from the Dwarfs’ mine in the proper order to win this game.

* Scene Stealer – Allows viewers to upload a personal photo and experience life as one of the Seven Dwarfs—on-screen in the actual film.

About Disney ‘COMBO PACKS’ (Blu-ray + DVD in a single package):
To provide consumers with unprecedented quality, value and portability of their favorite Disney classics, in 2008 WDSHE pioneered the Combo Pack – Blu-ray Disc(s) plus a DVD in a single package. Current Disney Platinum Edition titles available as Combo Packs include Sleeping Beauty and Pinocchio.