By now, pretty much the entire North American population is aware that Paranormal Activity – the little movie that could – was shot on a budget of $15,000. College and midnight screenings were packed and the response was almost universally good, so Paramount Pictures – after kudos by people like Steven Spielberg – decided to open the film wide this weekend. [The nearly $8 million it made last weekend – on barely 200 screens probably has something to do with that, too – along with the 1,000,000 signatures on an internet petition “demanding” its wide release…] 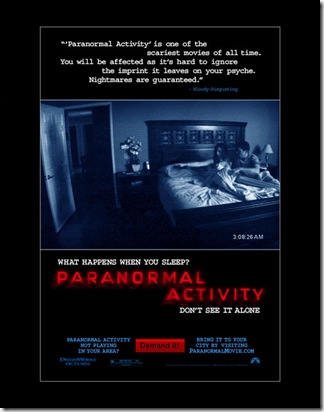 The story of what happens to Katie [Katie Featherstone] and Micah [Micah Sloat] over a period of twenty-one days and nights is an old-fashioned horror story. It builds slowly and deliberately from a period of getting to know the couple [lots of light humor, with the occasional intimation of weirdness] and thence to stuff that goes bump [sometimes literally] in the night.

Even before the first overt scare [an open door moving a few inches – then moving back to its original position], there’s something just slightly off about the couple and their house – enough to create the tiniest of knots in the pit of one’s stomach. Then, and only then, does the weirdness begin to accelerate. There’s the moving door; breezes out of nowhere; shadows that pass over a door; stomping footsteps; scrabbling footsteps [like amplified mice, or rats] and more. By the time Paranormal Activity reaches its final scene – and one big, final scare – even an unexpected cough from the audience is enough to create a jolt.

By insisting that the audience pay attention – and by not showing whatever-the-heck it-is that’s causing the couple’s terror – the audience is forced to exercise its own imagination. And that, can produce scary $#!+ enough to unnerve anyone. It also helps that the good looking couple is “real” good looking – as opposed to “Hollywood” good looking. Katie and Micah are far more relatable than any movie stars because they are real and unaffected. What effects there are, are practical, for the most part. That final scene has been juiced up a bit on a re-shoot, but is apparently just a more muscular version of what writer/director Oren Peli originally shot.

It’s only after leaving the theater that I realized that Micah was the stupid guy who usually dies first in Hollywood horror flicks. His insistence that he can, through technology, figure out how to defeat a supernatural evil – in the face of growing evidence to the contrary – might be endearing under other circumstances. Here, it’s both a source of horror and hilarity. He doesn’t have the sense to realize that he’s being toyed with and because of that – and his refusal to let Katie get help – that really unnerves.

There are, Peli seems to be saying, some things that don’t gave a damn about our technology. And they bite!