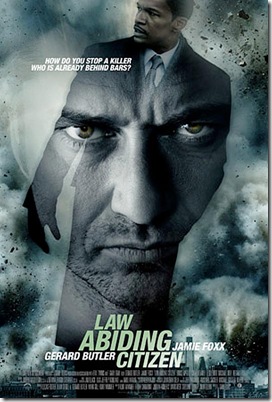 Law Abiding Citizen is one of those movies where you feel for the putative bad guy and not necessarily for the putative good guy. Shelton is the one who lost his family; Rice is the one who made a deal with one of the killers. But this isn’t a vengeance flick. If that was all Shelton wanted, he could have had it at any time during that ten year period. Instead, for him at least, it’s about calling attention to a badly defective system – with extreme prejudice.

As the death toll mounts, Rice learns – from a friend of his just murdered assistant – that Shelton isn’t just a tinkerer, average guy. Nope. He’s a “think tank” guy – and if he wants you dead, you’re dead. If not for dogged determination and legwork, and a bit of a break, Rice wouldn’t have been able to figure things out. And this is where the wheels fall off.

Shelton’s methodology turns out to be so implausible as to be ridiculous – even with the resources to which, we learn, he had access. By this point, however, director F. Gary Gray [Friday, The Italian Job] has provided an entertaining grudge match between Shelton and the legal system – and it’s executors – that rips by at an appropriately decent pace and extracted fine performances from an extremely cast [including such terrific character actors as Bruce McGill, Colm Meaney, Leslie Bibb, Gregory Itzin and Viola Davis] that we’ve received enough entertainment bang for our buck that he almost [but not quite] pulls things out through sheer hubris.