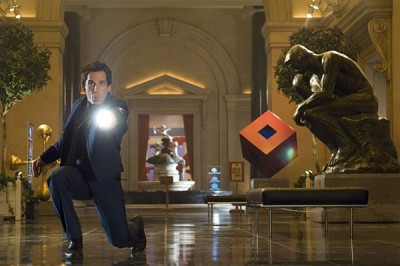 Larry Daley jumps on the next plane to DC when his next night at the museum begins. This time, he heads to the mother of all museums: The Smithsonian. He infiltrates the museum’s halls as a security guard for one night to save his friends.

Night at the Museum: Battle of the Smithsonian (NATM: BOTS) features the characters we know & love from the first film. This time around we get to meet Amelia Earhart, the first woman who flew solo across the Atlantic back in June of 1928. General George Custer, who was responsible for the annihilation of his own command of during the Battle of Little Big Horn, and Kahmunrah, Ahkmenrah’s brother who comes back to life with plans to rule the world. He assembles a posse to help him do his dastardly deeds including the likes of Napoleon, Ivan the Terrible, and Al Capone.

NATM: BOTS is the first film to work with the famous Smithsonian, which director Shawn Levy called, “a privilege”. The film brings new life to the Smithsonian and to a whole new level. It also brings a nostalgic sense of why 20 million people per year visit the many museums that make up Smithsonian. The casting could not be better. We have the return of Ben Stiller, who plays the quirky hero who saves the night from utter chaos. I must give kudos to Amy Adams – she is a firecracker that refuses to go out. Every role she has tackled in the last 2 years alone have been pure magic. Adams ‘s portrayal of the legendary Earhart was nothing short of amazing. She plays Amelia as this spunky, no-nonsense, spit in the eye of the danger aviatrix.

Hank Azaria’s portrayal of Kahmunrah is hilarious! As Kamunrah is out of touch with the present day, he displays a comical, villainous role that families will enjoy. Night at the Museum: BOTS gives the audience a tour of some of the Smithsonian museums including the Air & Space Museum, the Castle, and the National Gallery of Art. I do admit that the changing of some of the exhibits threw me off a bit. However, the spirit of the Smithsonian was done beautifully.

The only thing that was missing from the film was the human interest aspect that the first film displayed. In addition, the movie moved a bit too fast in some scenes. Overall, if you have been to the Smithsonian at some point in your lifetime, you will enjoy this film. If you haven’t, I recommend seeing this film first and then experiencing the real thing or vice versa. NATM is a wonderful film with a nice story, great cast, and comedic elements all wrapped up in the comfort the best museums in the United States . Finally, if you really think about it, this movie boldly says while you’re in DC this summer, come to the Smithsonian.