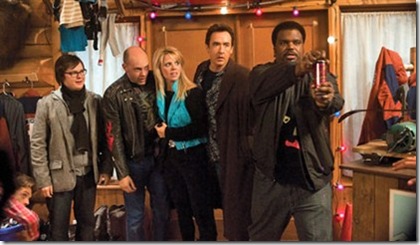 It’s not often that a movie title tells you exactly what you’re going to get in the title – and sometimes that can be a bad thing [*cough*Snakes on a Plane*cough*]. In the case of Hot tub Time Machine, though, the result is a comedy that’s both subtle and vulgar – and has heart.

Essentially, three friends [and one’s nephew] – the friends are: Adam [John Cusack], Nick [Craig Robinson] and Lou [Rob Corddry]; the nephew is Jacob [Clark Duke] – head off for a ski weekend at a ski lodge that the three last visited in 1986, which was, not coincidentally, the last time any of them were really happy [though the weekend badly for all of them]. Why? Well, Adam’s girlfriend has moved out and taken most of his stuff as well as hers; Nick’s marriage isn’t exactly perfect, and Lou has only just been saved from suicide.

Anyway, the ski lodge is now a ramshackle building that smells funny, and the town has mostly gone bankrupt. The guys couldn’t fit in better if they’d tried. But then their room’s hot tub goes from being the last resting place of a raccoon to a brightly lit beacon of warmth and nostalgia – at least until Lou spills his can of Chernobli [the Russian Red Bull] on the control panel. Faster than you can say let’s do the time warp again, they’re waking up to find their room miraculously restored – and when they venture out for some skiing, the day-glo ski fashions and big hair [and jheri curl!] tell them that things have really changed.

Jacob, a Stargate fanfic writer, figures out they’ve gone back to 1986. An enigmatic hot tub repairman [Chevy Chase – making like Don Knotts in Pleasantville] suggests that they should relive their time at the lodge exactly – if they ever want to get back to their point of origin [though with the way things were going back in the future, you have to wonder why they’d want to go back!].

Hot Tub Time Machine’s script calls for both some gentle satire [things like big hair bands and those day-glo ski outfits] and some/lots of not so subtle gags – like the bit where Lou sees himself in the bathroom mirror once the guys are back in ’86. Then there’s the relative subtlety of Jacob fading in and out [technically, he wasn’t conceived yet] as opposed to what happens between Lou and Adam’s sister, Kelly [Collette Wolfe] – and how that impacts on… well, everybody.

The inventive script is attributed to Josh Heald, Sean Anders, and John Morris, and it’s driven home by director Steve Pink. Between them, they create two very specific worlds and a handful of very specific characters – two things that make comedy better. And they make it all about choices: should Adam go back, or stick with this cool chick [Lizzy Caplan] he met –who’s covering the Poison tour! Should Nick go home, or go with his music? And what about Lou and his desire to kill himself? And there’s the matter of Jacob getting conceived!

Cusack makes this film work. He is such a part of the eighties that we instantly buy the change of time period and desire of the three to decide to fight the future – though Jacob’s not taking that laying down. Even though each changes his behavior a little, things still play out pretty much the same – though a key decision does have a significant impact. There’s even potential for Blaine, the patriotic but clueless leader of the ski patrol – and Christopher Guest’s one-armed bellhop [you read that right the first time…].

Stick around for the music video over the closing credits – it’s by a familiar band and drew the best groupies.

Hot Tub Time Machine is the funniest movie since The Hangover.

2 thoughts on “MOVIE REVIEW: Hot Tub Time Machine – Like It Says on the Box!”