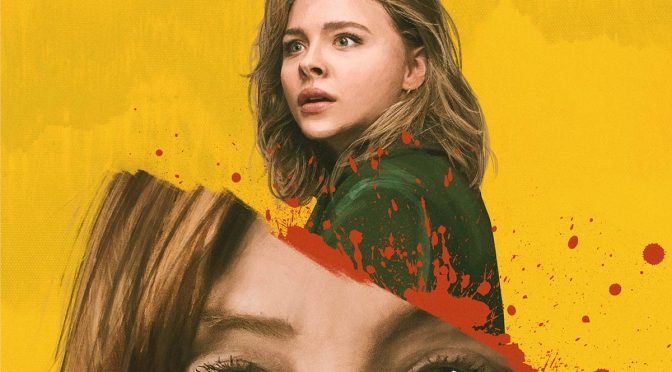 In Greta, Moretz is a carefree College grad who lives in a fabulous downtown SoHo loft with Erika (Maika Monroe ) her best friend from college. I know Erika’s father bought her the loft as a starter apartment, but one come on, how many College grads live in SoHo apartment that’s large enough where you can literally ride a bike in it? I could not get over the fact that these to 20-somethings were living in a multi-million condo. But anyway, one day Frances finds a purse on the subway and decides to return it to its owner Greta (Isabelle Huppert ). Her roommate tells her she’s crazy and the city will eat her alive.

It’s funny the movie portrays Greta as though she’s some naïve girl from some hick town in Kansas when in reality she’s from Boston. Sure, not as big as NYC, but last I checked Boston is still a major city. I don’t think wanting to return a purse or property you found to its owner makes you a hick, it just makes you nice. A long time ago when we were kids my brother and I found a dirt bike and turned it into a Gas Station. Next day that dirt bike was on sale for several hundred dollars. At that point I learned my lesson. But there’s nothing inherently wrong with trying to do the right thing.

Of course, in this instance, stay away from Greta! She’s crazy! Of course, that’s not apparent at first. Greta seems like a sweet old lady who just wants a friend. French actress Isabella Huppert does a nice job of flipping the switch from sweet innocent grandmother to obvious crazy woman rather nicely. The problem is the movie shows its cards too early and at the same time feels terminally slow. Nothing much happens in the first half of this film.

We see the relationship between Greta and Frances form, but like I said it feels like Frances discovers her secret too early. I would have liked just a few more scenes of them getting closer and how Greta worms herself into Frances heart. We understand why and how she’s able to do it so easily. Yet another cautionary tale about the dangers of putting your entire life on Social media.

Even at a 98-minute runtime the film felt long and once Greta goes crazy in the last 30 minutes there are a lot of maddening head scratching moments. I know Frances is supposed to be naïve but when your life is on the line, I’d expect you to fight back. Not just sit there scared to make a move. The drugs clearly helped cow her but, I don’t know there were so many bad horror film clichés at the end that at one point I literally said out loud, in frustration, “Just KILL her already!”

If it wasn’t for the power of Moretz presence and the chemistry she had with Huppert this film would have been, not a disaster, but definitely a lot less watchable than it has any right to be. I will say at one point I really hated the direction the ending was going to take, but I liked the little twist even if it did still end pretty much how you’d expect this movie to end. This is a wait for Streaming or if you have a service like AMC A-List. Type of film. Didn’t hate it, but it was kind of a struggle to get through.