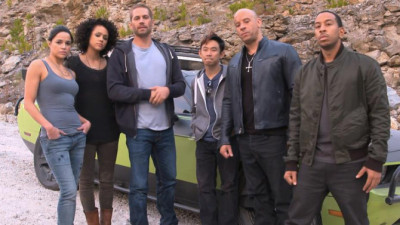 Let me start this review as though I’m at an AA meeting. Hello, my name is Michelle and I’ve never saw the first four Fast and Furious movies. Welcome Michelle, you are in a safe place… With that out of the way I say “Franchise,” I define it as from Fast Five onward…. Ok? Furious 7 is a shut your mind off, thrill ride that delivers everything you would want a movie like this to deliver – Thrills, Chills, several WTF moments and a lot of tears. This movie would be a textbook case on how you end a film franchise – if we didn’t know they were doing Furious 8.

The thing that separates the Furious franchise from other action movies it embraces its history and characters instead of running away from it. Their characters actually grow from film to film and don’t regress back to where we first met them (I’m looking at you John McClane). So each Furious film has a real impact in the next film and I never feel like I’m wasting time investing emotional energy into their journeys. 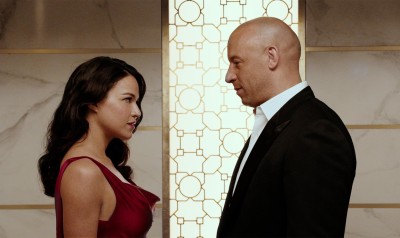 It’s a film series that is about more than just its ridiculous, over the top action sequences, it’s about building and protecting your family. When Diesel talks about how they are all love each other, he says it with such conviction you can tell that these guys and women love each other both off screen and on – there’s little acting going on in these intimate moments. Frankly that is refreshing. The recent, tragic death of Paul Walker adds a whole new layer to this film.

Every death defying escape felt all the more real because you can’t help but wonder is this the moment they kill him off the franchise. Any other time, I would shrug it off saying, “Nah, they aren’t going to kill off their main star.” It’s hard not to wonder if it would have been as emotionally moving if not for that. 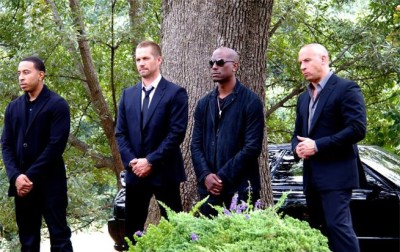 Notice I haven’t mentioned the plot yet? It’s Furious 7 who cares? There are couple of new additions to the franchise: Kurt Russell in one of the weirdest extended film cameos of the year as a CIA spook named Mr. Nobody, Nathalie Emmanuel as a hacker named Ramsey and Jason Statham as the resident annoying, all knowing, all seeing super bad guy who shows up to cock block in places there’s no way he should be at.

New series director James Wan best known as one of the creators of Saw and other horror franchises like The Conjuring steps in for Justin Lin and proceeds to do everything he can to prove that the laws of physics don’t work in this world. The quicker you accept that fact, the more fun can be had in this film. 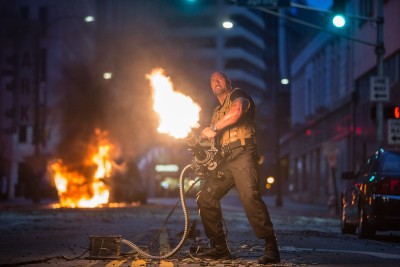 I’ve never been a fan of Statham, I find him to be incredibly wooden and all of his action scenes are always shot using a bunch of quick cuts so you can’t even tell what’s going on. The same thing happens here. Every time he enters a scene the film feels like it becomes all about him and feels like I’m watching The Transporter.

Other than the Statham issue (which is a pretty big one since he’s in a large chunk of the film), the rest of Furious 7 is an fun action film that wears it’s heart on its sleeve. I’m not ashamed to say (ok, maybe a little) that I cried like a baby at the end – but I didn’t ugly cry. This would be a perfect way to end this series and they should just stop and leave on this high note.