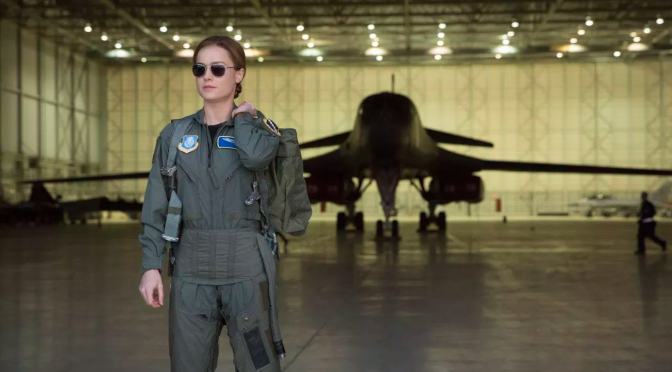 As the former Wrestler Vader used to say, it’s time, it’s Time! It’s Captain Marvel (Brie Larson ) time! Ok, that line sounds better in my head than it does on paper, but we’ll go with it. All the obnoxious, toxic, manufactured controversy aside this movie works and works well. It’s not the greatest movie in the world, but then I think most Marvel films are way overrated, but this is a solid time at the theaters.

You need to temper your expectations and assumptions about this movie before you walk into the theater. For starters this movie doesn’t necessarily set up End Game. Sure we see how Nick Fury (Samuel L. Jackson ) gets the pager, which is paid off in the End Credit scene and we finally found out how Fury loses his eye – which sadly isn’t as dramatic or heroic as we’d like to think. What this movie does and what Marvel always nails is the world building aspect. This movie is very much a Phase I or in this case Phase IV, setting the stage type of installment.

If Captain Marvel is going to be a linchpin of Phase IV and Brie Larson is signed on for 7 movies then it’s pretty clear a lot of this movie is set up for the future and not really End Game. It serves to answer the simple question, “who is this chick that just popped up out of nowhere in End Game?” Because we all know a large chunk of the audience will ask that question. This way they don’t have to waste valuable End Game screen time setting her up. It’s brilliant really. 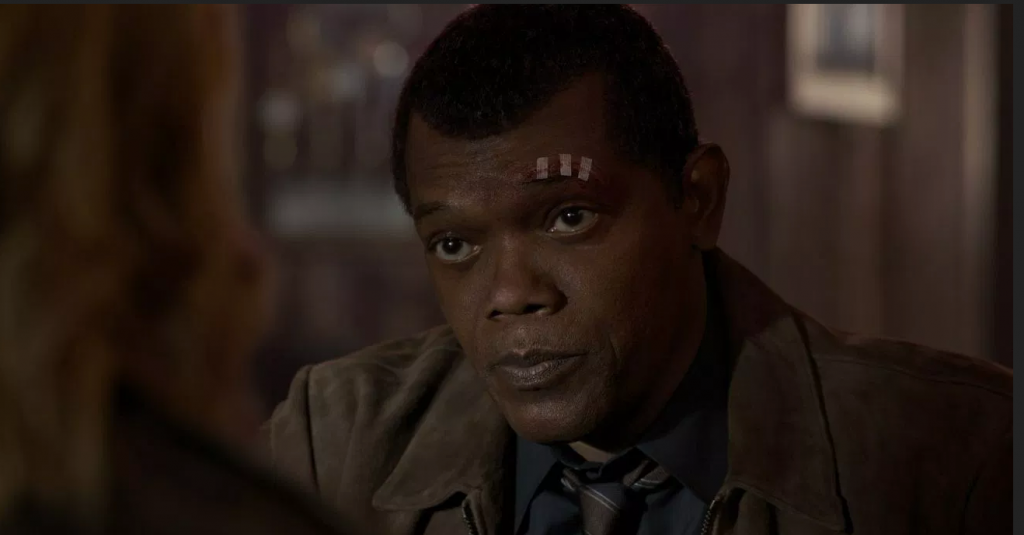 I loved Larson’s performance. It’s a lot subtler and more subdued than you would probably expect and the trailers didn’t do this film any credit. There’s a reason she doesn’t “smile” in the trailers and it’s made perfectly clear in the beginning. Not every move has to be a joke fest and I thought the complaint that Brie didn’t smile was pretty damn stupid and sexist. No one has ever complained about a male lead not “smiling” in a trailer. NEVER! People have said a trailer is too serious, or dark, or grim, but not once said “why aren’t they smiling?”

She’s a soldier, fighting a war, that’s not a smiley, jokey thing. In the early scenes her mentor Yon-Rogg (Jude Law ) tries to drill it into Vers (Carol Danvers/Captain Marvel) not to let her emotions control her and that they make her weak in battle. So, you see her trying to play the tough emotionless Kree warrior in the beginning of the movie only to become more “human” as the film progresses. Her early interactions with Yon-Rogg when they aren’t training are actually fun, you really see the bond that they have. I really liked the first part of the film when we’re introduced to the Kree homeland, it looks beautiful and fully realized. 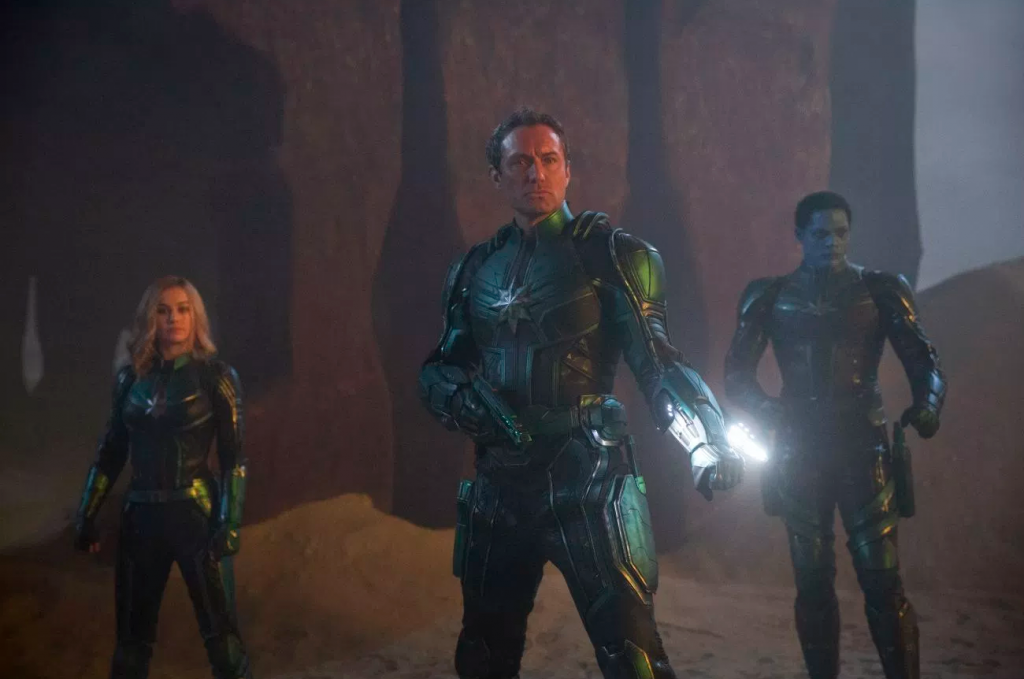 The movie’s first flaws start when we first encounter the Skrulls. The first battle sequence on the outskirts of the Kree Empire looks wretched. The entire sequence is very poorly shot and edited Directors Anna Boden, and Ryan Fleck seem blind here. It was so dark that I literally couldn’t tell what was going on. Afterwards, thanks to Skrull manipulation we get glimpses of Vers’ past life on Earth. These flashbacks are so brief and convey so little information that you wonder why it’s there, and felt like it brought the momentum of the first 30 minutes of the film to a hault. It’s the problem most films that feature flashbacks face.

The film shines when it’s moving forward and we see Vers slow transition into becoming Carol Danvers and eventually Captain Marvel. Her interpersonal relationships with Fury are fantastic. They are light hearted, fun and you really start to see Nick Fury go from just a top-level agent of Shield to what we know and love today, after the events of this movie you understand perfectly why he wants to form the Avengers and even where the name came from. 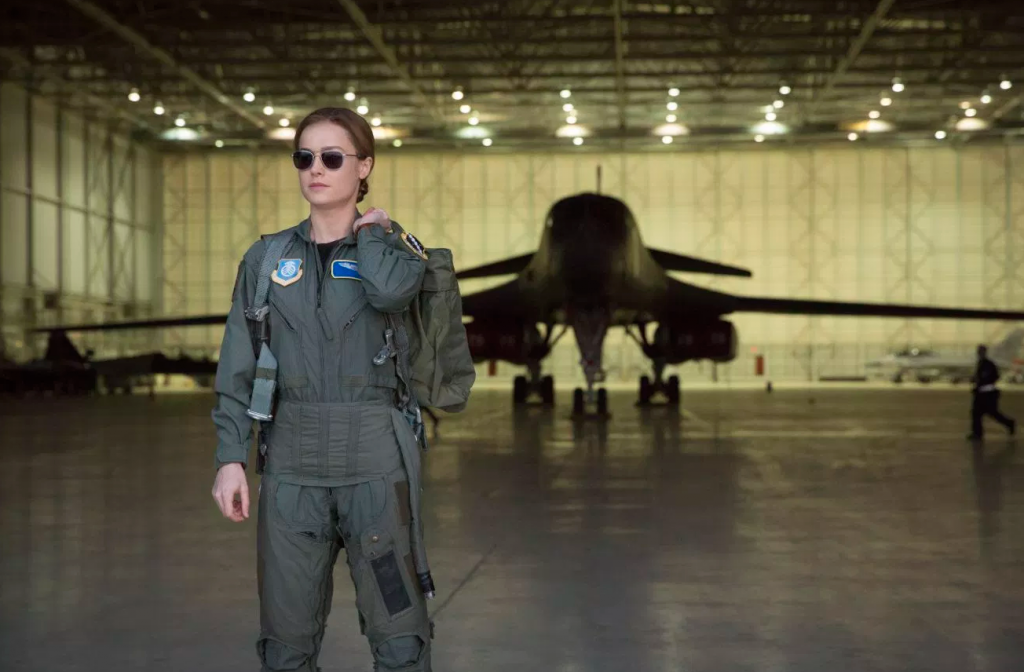 As I said in the beginning, while I didn’t love any of Marvel’s origin films, the area they nail perfectly is the cast a world building, here it’s no difference. Along with Brie and Samuel the rest of the cast flawless and everyone has a full character ark where everyone is fully realized and ends up in a radically different place than where we first meet them.

I’ve never been a fan of Jude Law but he is surprisingly great here. He’s funny, but serious and bad ass. Ben Mendelsohn is pretty great as the Skrull commander Talos / Keller, I’ve always loved Annette Bening so it’s no surprise she’s great here, playing multiple roles include Carol’s former earth boss Dr. Wendy Lawson and as a manifestation of Vers mind when she talks to The Supreme Commander. Lashana Lynch  is solid as Carol’s best friend and fellow pilot Maria Rambeau. I really hope Maria and her daughter make an appearance in End Game. 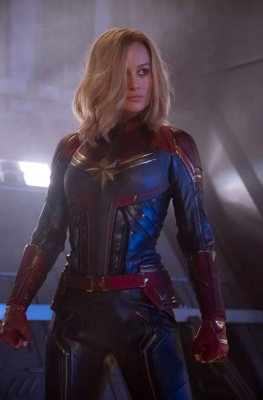 Other than a few visual nods like her crashing into a Blockbuster, the cars, use of pay phones and a couple of pop cultural references I thought the use of its 90s setting was largely wasted. The music selection was good, but forgettable and not well integrated into the story, for the most part it was very subtle and not in your face like Guardians of the Galaxy. You could remove it and it wouldn’t impact anything.

As far as irrational fears and complaints about Captain Marvel’s power levels are concerned. Carol goes through most of the film not having her memories, nor knowing her true potential. This doesn’t occur until the last 10 minutes, yes she is very powerful, we do not know the extent of those powers yet and what’s wrong with having a character that’s powerful? It doesn’t mean she can’t be defeated and it doesn’t make her some Mary Sue character either. That term is thrown around way too much. She’s not perfect or flawless in this film. We see her train, we see her fail and we see her rise to the challenge and achieve her full potential.

Usually Marvel origin films have trouble sticking the landing, but Captain Marvel is just the opposite, it feels like it takes off in the 3rd act and becomes near flawless action movie where all the beats that it clumsily builds up to really clicks into place and the twists truly work. Right now, the movie does answer some questions about End Game, but I think it’s true goal and importance to Phase IV will be realized once Phase IV is in full swing. In a year, people will look back on Captain Marvel and go, “wow, I didn’t realize this thing in Captain Marvel was this!”

Now you could say Guardians of the Galaxy is the entry point to Marvel’s Cosmic Universe and its true, but I think Captain Marvel is meant to hedge their bets since it seems like GOG is about to implode and they are having trouble getting the 3rd film off the ground and who knows if the cast is going to be around. With Captain Marvel they have a clear entry point into possible Phase IV stories like Secret Invasion, World’s Collide, etc.  Also I’m just glad that hopefully after End Game I’ll never have to see the Teserect again.

I wish the internet didn’t become this toxic cesspool of hate. But unless you fully stay off it, this garbage will continue. This is a fun ride at the movies, not a great film and not going to set the world on fire, but still a solid start to this brand new, pivotal character and next Phase of the MCU.