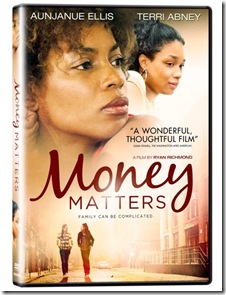 Prior to its DVD release on November 15th, Money Matters will have a screening on Thursday, November 10th at the Landmark E Street Cinema in Washington D.C. The film depicts the struggle between Monique ‘Money’ Matters and her mother, Pamela, to understand and, hopefully, accept each other for who they are.

Check out the trailer and press release after the jump.

"The complexities of the mother/daughter relationship unfold…"
— NeoBlack Cinema

When it comes to familial relationships, there’s nothing more mythic – and more contentious — than the battle between mother and daughter.  How can one find oneself when home is not an escape, but the problem itself? On November 15, Image Entertainment will release the critically acclaimed drama and festival favorite Money Matters on DVD.  A winner at the Urbanworld Film Festival, Roxbury International Film Festival and Larry Neal Writer’s Awards – as well as a finalist at the Martha’s Vineyard African American Film Festival and an All Access at the Tribeca Film Festival – Money Matters will be available on DVD for an MSRP of $14.98.

Monique “Money” Matters (Terri Abney) is balancing precariously on the brink of her adolescence…and her relationship with her mother Pamela (Aunjanue Ellis – Ray, Men of Honor), is just as unsteady.   As mother and daughter argue, desperate to understand each other, the roles of parent and child become clear and then confused once more.  Throughout this journey of comprehension, a family secret is discovered:  a secret which, like a wound, has become exacerbated by years of neglect and regret.

Money’s commute to her Catholic school takes her far from her derelict neighborhood and her difficult home life:  yet in this alien world she feels just as much of an outcast. However, when she befriends a sympathetic neighborhood girl, their friendship develops in ways that will push all boundaries.

Money Matters is an intimate and thoughtful story of a mother and daughter who are facing their adulthood together.  Moving and candid, it is rich with intelligence and wit:  a rewarding passage of discoveries and encounters that teaches us what really matters.