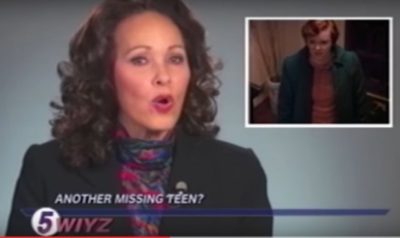 Follow the jump for the latest from WIYZ, Hawkins, Indiana.

You think you know the 80’s. But then an archival newsreel from 5 WIYZ Hawkins, Indiana is uncovered and you question everything. Like why is Brenda Wood’s hair so totally amazing? Or, whatever happened to that girl Barbara Holland? Just how many Eggos did Eleven eat? The world needs to know!

About Stranger Things Season 1:
A love letter to the supernatural classics of the ’80s, Stranger Things is the story of a young boy who vanishes into thin air. As friends, family and local police search for answers, they are drawn into an extraordinary mystery involving top-secret government experiments, terrifying supernatural forces and one very strange little girl.

Matt Duffer and Ross Duffer (Wayward Pines, Hidden) serve as writer, directors and co-showrunners of the series, and are executive producers along with Shawn Levy and Dan Cohen via their 21 Laps entertainment banner (The Spectacular Now, Night At The Museum, Real Steel, Date Night). Shawn Levy also serves as director. Stranger Things is a Netflix original series.

About Netflix:
Netflix is the world’s leading Internet television network with over 83 million members in over 190 countries enjoying more than 125 million hours of TV shows and movies per day, including original series, documentaries and feature films. Members can watch as much as they want, anytime, anywhere, on nearly any Internet-connected screen. Members can play, pause and resume watching, all without commercials or commitments.