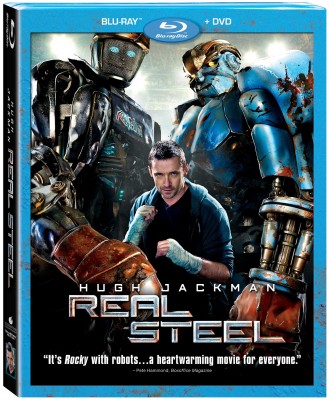 If I did a top ten list last year, Real Steel would be on it. I first watched footage of the movie way back in March when it debuted at Cinemacon.  At the time, there was nothing about that 20-minutes that wowed me. The only impression I had was, “Wow, they actually made Rock Em Sock Em Robots – The Movie.” This is a movie where watching a trailer or scenes out of context does it a disservice. As individual parts, the movie is average at best, taken as a whole – it is fun and surprisingly emotional.

This movie has all the standard sports movie cliches – there’s the old grizzled vet – although, Hugh Jackman isn’t exactly old, but he is “grizzled” and bitter as former boxer Charlie Kenton. His promising career was cut short by a combination of his own boozing and the invent of Boxing Robots.  He’s washed up and now uses whatever broken down Robot he can find to box in underground tournaments. His world is turned upside down when his kid Dakota Goyo (Max Kenton) shows up out of the blue.

Hugh Jackman is absolutely fantastic in this movie.  All the training he did with Boxing Legend Sugar Ray Leonard pays off in spade. In every fight he just looks completely authentic and comfortable in the ring when he’s sparring and outside the ring when he’s training his robot to fight.  Every Jab, Upper Cut, Left Hook he throws looks like something a real boxer would execute.

Ten year old Dakota Goyo (Max Kenton) is amazing. He does not come across as the smart know it all – even though he is, he plays this role perfect. He displays just the right amount of vulnerability to the tough kid exterior and brings such different dimensions to his performance. The onscreen chemistry between Jackman and Goyo is flawless.

Director Shawn Levy (best known for the Night at the Museum Series, but for me he’ll be known for Disney’s The Famous Jett Jackson – I loved that show!) knows how to work with his actors and does a fantastic job on the camera work.  He let’s it linger and never rushes it.  There are some beautiful shots in this movie, like the first reveal of Noisy Boy – the high-tech, shiny new Robot that Kenton buys in the beginning.

The facial expressions on a lot of the robots made me feel like I was watching real live humans with emotions and not “robots.” Every Robot in this movie has more heart, emotion and characterization than anything in any of the Transformer movies.  Every time one of these Robots took a shot, I winced and felt for them. The way all of the fight scenes are staged are smooth, with nice camera work that does not distract from what’s going on screen. Never once, did I not believe these Robots were “real.” Michael Bay can learn something from Levy. 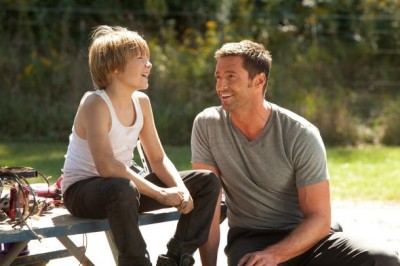 For once Danny Elfman didn’t do a score that I hated. It was serviceable, but not memorable. There was no bombastic John Williams style moment, it was quiet and blended well with the movie and was not distracting.

Not only did Sugar Rey Leonard work with Hugh Jackman, he was heavily involved in a lot of the boxing choreography and it pays off in spades.  Every fight was different, fairly unpredictable and exciting to watch.

The visual effects in this movie are amazing, there’s a timeless quality to how this world is envisioned. It is in the future, but not “futuristic,” this world looks like the world we could have in 10 or 15 years. It’s grizzled but clean and the technology – even the robots looks like inevitable iterations of current technology.  The use of practical affects (combined with CGI) and using real robots in some of the shots are awesome.

But beyond all the effects, this movie has the one thing it really needed – heart. It wore it on its sleeve.

This Blu-ray transfer is beautiful, there are a lot of really nice contrasting colors on display here. This is a movie that utilizes blacks, golds, reds, and purples with sharp lighting for a beautiful glowing affect off some of the shinier robots.  Everything looks vibrant and alive. The sweat on some of the characters almost glisten, although strangely enough, Hugh rarely sweats.  I love the lighting design in this movies. 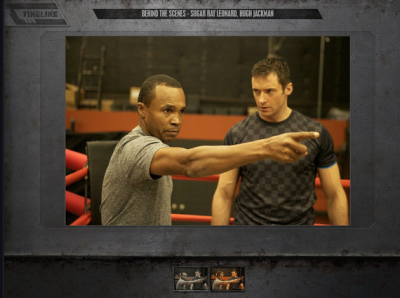 Doing audio mixing for a sports movie must be hard. You have to have a perfect balance of the crowd noise, with the actor’s dialog, music and ambient sporting noise. The DTS-HD Audio Mix is beautiful, every punch and all the crowd noise comes across perfectly and it never drowns out the actors.

The movie has a simple and straightforward Menu Navigation where the color pallet consists of Large White Text Fonts against a black background at the bottom of the screen. No annoying flash animations. The background music is the simple – if bland Elfman theme that kind of lulls me to sleep. The Packaging is lazy, just a standard 2-disc affair – one Blu-ray and one DVD.

There are some interesting extras on this Blu-ray set, it’s highlighted with Touchstone’s Second Screen Application which allows users to view extra features on their iPads or computers in sync with the movie.  I’ve raved about how much I love this new technology for the last several months. What makes second screen so cool is you can watch all the extras and the director commentary on your device and still watch the movie in perfect harmony. As opposed to the old school way where watching a movie with a Director Commentary track meant you really can’t “enjoy” the movie because the primary audio is muted for the commentary.

Second Screen is not implemented as well as it has been on other Blu-rays like Star Wars, The Lion King, etc. It misses the point of Second Screen because the disc features an old school style commentary track with Shawn Levy and the app rarely seems to be in sync with what’s going on screen. So not only do I not get to watch the movie normally, but now I have to listen to Shawn and follow the out of sync extras on my iPad.  I still love that they at least tempted to use the technology, I just wish it was done better.

In addition to Second Screen, a full length Commentary Track, there’s also a nice 13 minute fake ESPN style feature about boxer Charlie Kenton, a 14 minute behind the scenes look at the creation of the metal junkyard set, a 5 minute look at how the robots were built, 6 minutes with Sugar Ray Leonard and 2 deleted scenes.