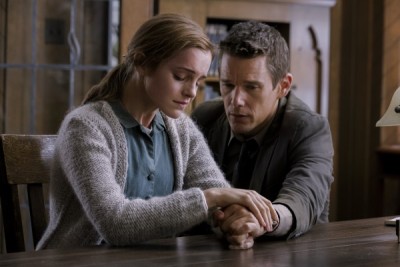 Emma Watson and Ethan Hawke have starred together in a horror movie (the things that come to you when you’re not looking), called Regression – directed by Alejandro Amenabar (The Others).

Watson plays a young woman who has accused her father of an unspeakable crime – a crime he confesses to but does not remember committing; Hawke is the cop who wants to find out what’s going on.

Regression opens in the U.S. on August 28th. Check out the Spanish trailer (hence the subtitles) after the jump.