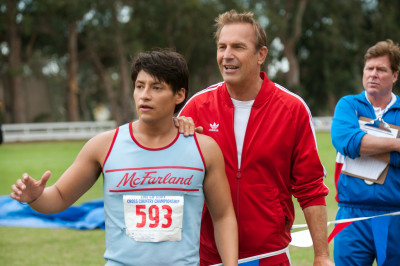 Yes, it’s a sports movie. And yes, there’s a ‘Big Race.’ But MacFarland USA is not just another sports movie. It’s a story of families – the ones we’re born into; the ones we build around us in our communities, and the ones that expand beyond even that.

After an incident at halftime in a football team where his team has set the dubious record of most points allowed in a half, Jim White (Kevin Costner) and his family find themselves in the small town of McFarland, California – a rundown place that’s almost exclusively Hispanic.

White, his wife, Cheryl (Maria Bello), and daughters Julie (Morgan Saylor) and Jamie (Elsie Fisher) are less than impressed – especially when they first see the house they’re moving into (‘It’s a dump!’ is Julie’s reaction).

After White holds a player out of a game, he’s removed from the football team but not his teaching (PE and Life Sciences) position. When Jamie notices that some of the boys in his PE class are fast, he gets the idea that maybe they could be a cross-country racing team.

There are obstacles – when they’re not at school, the boys are in the fields picking whatever’s in season to help their families; White has no experience either as a runner or a running coach; and White and his family have no clue about the culture of the rest of the townspeople (though he inadvertently does the right thing when one of his new neighbors gives him a live chicken to welcome the Whites to McFarland). Then there’s the unexpected benefit of his team’s growing achievements – the possibility of a job at one of the posher schools in the state.

White has been humbled by his loss of a great job and is humbled further by his gaffes in his new position and interactions with the community, but learns from his mistakes – and helps his team learn from the mistakes each makes. Before long, he’s being called Blanco in an at least partly affectionate way.

Finally, in a sequence that illustrates the kind of man he is – and the kind of people who live in McFarland – the importance of Julie’s fifteenth birthday (for which he had forgotten the cake only days before) plays into the ways that the Whites and the people of McFarland have come together.

Sure, there are races. White coached his improbable team to the state championship. That’s a matter of record – as are the nine championships in the first fourteen years it was held. The races are even kind of exciting – especially as one of the team, an overweight boy named Danny Diaz (Ramiro Rodriguez), plays a pivotal role as his experience grows.

Another pivotal arc is the understated bond that grows between Julie and the team’s star, Thomas Valles (Carlos Pratts). And there’s the way local beautician Lupe (Martha Higareda) helps out when Cheryl’s car breaks down outside her salon. Or when White is invited to stay for dinner with the Diaz family.

McFarland USA has all the trappings of the classic sports film – the unwanted coach seeking redemption; the ragtag, underdog team; the small, possibly dying town that most will never get to leave; the big game/match/race – but it’s about people, dreams, overcoming hardships and forming (and keeping) families.

Costner does possibly his best work since Field of Dreams here. He wears the mantles of the not-quite-washed-up-yet coach and the father-who-can’t-quite-get-it right (until he does) with honesty and depth. For some reason, he’s at his best in great sports movies (even those that are merely good, like Tin Cup) and he’s terrific here.

Bello is also superb as the supportive wife who actually begins to acclimate to her new surrounding better than her husband and discovers that McFarland really feels like home. She can play devil’s advocate if necessary, without withdrawing her support – it’s a masterfully understated performance.

I don’t see McFarland, USA (and what’s with the last minute name change, anyway?) being a monster hit, but it really should be. It’s smart and heartfelt – hallmarks of its director, Niki Caro (Whale Rider) – and, on top of everything else, it looks great (cinematography by Adam Arkapaw and Terry Stacey).