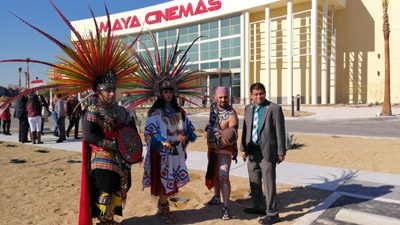 A $75 million cinema center opened its doors Thursday in North Las Vegas, paving the way for future development in the NLV downtown area.

Maya Cinemas are located on North Las Vegas Boulevard, between Lake Mead Boulevard and Carey Avenue, and includes 14 screens, an arcade, cantina, and event space. It also boasts some of the largest displays in Nevada, with one larger than IMAX and other theaters featuring chairs that move along with a movie.

He also said he specifically chose the site, which was once a dirt lot, because he wanted to benefit the underserved community in North Las Vegas, as many residents had to drive at least 20 minutes to go the movies.

But the cinema is all part of a larger goal to spur development in downtown North Las Vegas.

Councilman Isaac Barron says he’s glad to see a family-friendly space where the community can gather.

“Economic development is the best tool for combatting crime and poverty,” Barron said.

In addition to showing everything mainstream theaters have, they also plan to showcase documentaries, international, and foreign language films.

Maya Cinemas was chartered in 2000 with a mission to develop, build, own and operate modern, first-run, megaplex movie theaters in underserved, family oriented, Latino-dominant communities.

In 2003 Moctesuma’s vision was realized with the launch of the first Maya Cinema in Salinas, CA. Today this vision has expanded to Bakersfield, Pittsburg, Fresno and Delano, CA with continuing expansion plans in California and beyond.

Maya Theater is located at: