Entertainment News for The Rest of Us
Sheldon Wiebe
Comic Books, DVD 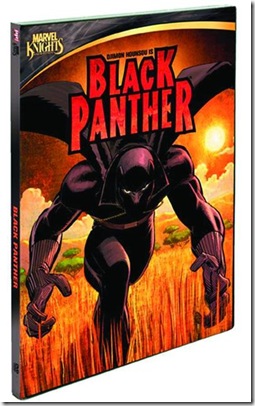 THE HIGHLY ANTICIPATED DOMESTIC PREMIERE OF

LEAPS ONTO HOME ENTERTAINMENT SHELVES FOR THE FIRST TIME

Marvel Knights Animation delivers all-out action as Reginald Hudlin and John Romita Jr.’s Black Panther is brought to life in his own series for the very first time since his creation in 1966. With guest appearances by the X-Men and Captain America, The Black Panther’s six episodes are filled with exhilarating action, dazzling visuals and an explosive soundtrack as he leaps from the comic book pages into homes everywhere. On January 18, 2011, Shout! Factory, in association with Marvel Knights Animation, will debut the long-awaited Marvel Knights Animation: Black Panther on DVD.  Inspired by the popular graphic novel from acclaimed filmmaker/writer/producer Reginald Hudlin and legendary comic book artist John Romita Jr.

Stan Lee and Jack Kirby created the first and the greatest black Super Hero when they imagined The Black Panther in 1966.  He is no ordinary Super Hero; he’s the king of the scientifically advanced country of Wakanda.  Marvel Knights Animation: Black Panther takes viewers on a thrilling adventure which includes battle scenes, love stories and political intrigue while John Romita, Jr. pens panoramic vistas, brilliant visual design and intense action.

Deep in the heart of Africa lies Wakanda, an advanced and unconquerable civilization. A family of warrior-kings possessing superior speed, strength and agility has governed this mysterious nation as long as time itself. The latest in this famed line is young King T’Challa, the great hero known worldwide as the Black Panther.

Now, outsiders once again threaten to invade and plunder Wakanda. Leading this brutal assault is Klaw, a deadly assassin with the blood of T’Challa’s murdered father on his hands, who brings with him a strong army of super-powered mercenaries. Even with Wakanda’s might and his own superhuman skills, can the Black Panther prevail against this deadly invading force?