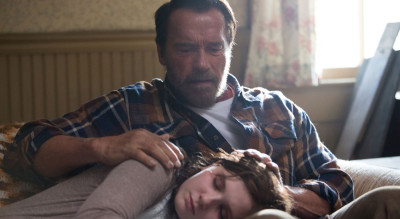 Maggie (Abigail Breslin, Zombieland, Scream Queens) has, of course, been scratched by someone who’s caught the virus and turned before they were discovered. Wade is only allowed to take Maggie home because a doctor friend of his pulled a few strings – Maggie is clearly not anywhere the turning point, yet. Still, he is given a clear timetable for returning his daughter to quarantine if he can’t handle doing the job himself.

When Wade and Maggie return home, we meet the rest of the family6: Caroline (Joely Richardson, The Girl With The Dragon Tattoo, Vampire Academy) and Maggie’s siblings Mollie (Carsen Flowers, Runaway Hearts) and Bobby (Aiden Flowers, The Originals). They are all glad to see her before they shuttle Molly and Bobby off to an aunt’s place just to be safe.

Maggie, Wade says, is not going back to quarantine – something she’s even more glad of after a get together with some her friends from school (including one who’s been infected just like her).

The pervasive feeling of Maggie is one of slightly melancholy dread. Wade knows – even if cops Ray (Douglas M. Griffin, Star-Crossed) and Holt (J.D. Evermore, Rectify) keep asking him show is (sometimes, not politely).

But Maggie is still a teenaged girl and wants to visit with friends – hooking up with Trent (Bryce Romero, The Maze Runner) – whose also been affected, and riding with Allie (Raeden Greer, American Horror Story), her best friend.

As closely as possible, Wade and Caroline try to keep life as normal as possible for Maggie. But, of course, she is infected and there are signs that the virus is progressing.

Without using any – let alone Ar-nuld-sized amounts of violence – Maggie is thoroughly engaging because it’s a melancholy story about the inevitable and how one man and his daughter fought to put off that inevitability as long as possible.

The incredibly nuanced script comes from first-timer John Scott 3, while the film directed by Henry Hobson, whose only previous directing experience is the 84th Oscars® and the video game Resistance 3.

Scott’s script is almost entirely character beats – there’s only a couple encounters with turned in the entire movie. Instead, we get father/daughter moments; stepmother/daughter moments and even a few moments between Maggie and Bobby before he leaves.

Outside of the scratch that’s going to kill her and turn her into a flesh-eating monster, Maggie is simply a teenaged girl who gets along with her dad. That Abigail Breslin takes Maggie’s journey from mostly okay to that last second before turning is a remarkable feat.

Arnold is superb as Wade, too. Without having to amp things up to eleven, he turns in a subtle, nuance performance like we’ve never seen from him before – though, let’s face it, this is the first time he’s really be called to tackle this kind of a role. Given how good he is here, maybe he’ll do more straight dramatic pieces. He’s definitely got the chops for it.

Maggie is a most unexpected gem – a character driven, nuanced and creepy but heartwarming undead movie!