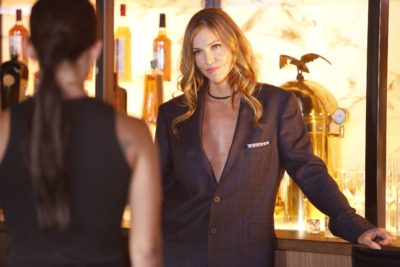 After having Mum (Tricia Helfer) change into something a little less bloody – and a lot slinkier (after raiding Mazikeen’s closet), she and Lucifer (Tom Ellis) set out to retrace her steps so that she can prove that she didn’t do it. 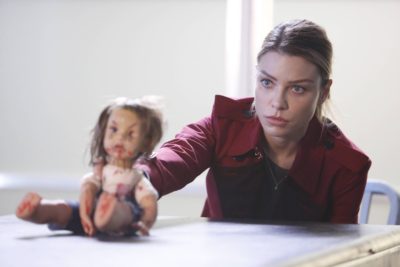 We learn Mum’s ‘meat sack’s’ name, Charlotte, and her activities lead into an FBI operation to catch a cartel kingpin (while her husband stays at home with their sick children – leading to some withering remarks by Lucifer). Another revelation involves Charlotte’s monogamous relationship…

Despite Lucifer’s efforts, it seems that Charlotte might well have been targeted by the cartel – the killer’s MO seems to fit a specific hit man – but again, things are not what they seem.

Helfer does a great job of making Mum’s/Charlotte’s confusion and concern for Lucifer believable – and when Charlotte/Mum also traumatizes him in a very specific manner that is more than a little unusual (and a tad bit uncomfortable), she really sells her innocence.

Meanwhile, Amenadiel (D.B. Woodside) has to deal with a very angry Dr. Linda (Rachael Harris) and his betrayal of her trust – which leads to a HUGE revelation when he’s alone afterword. 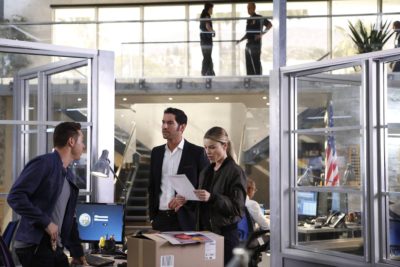 One of the better moments of this episode comes when Chloe imparts an important lesson about parenting to Lucifer. It seems to make a difference in his treatment of Charlotte/Mum – to the point that he even surprises Maze, whom he left ‘hot-mother-in-a-slinky-dress-sitting’ Charlotte. (The Charlotte/Mazikeen bits are particularly fun.)

After this ep, we have to wonder if Lucifer is seriously considering reneging on the deal he made with Dad in the first season finale – which raises the anticipation levels for upcoming episodes.