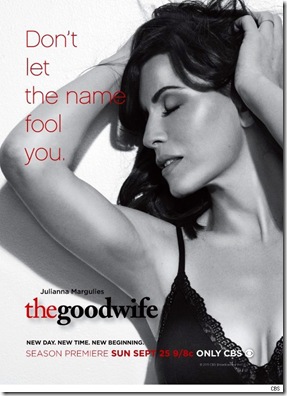 CBS.COM LAUNCHES THE GOOD WIFE “ULTIMATE FAN SWEEPSTAKES,” GIVING FANS A CHANCE TO WIN A TRIP TO THE SET OF CBS’s HIT SHOW

Fans can Complete a Series of THE GOOD WIFE Themed Challenges on CBS.com to be Entered to Win Grand Prize

SAN FRANCISCO, August 25, 2011 — CBS.com today launched THE GOOD WIFE ultimate fan sweepstakes*, inviting fans of the show to complete a series of online challenges for a chance to win a trip to the New York City set of CBS’s Emmy and Golden Globe award winning show. THE GOOD WIFE begins its third season on its new Sunday night timeslot on the CBS Television Network on Sept. 25 (9:00 – 10:00 PM, ET/PT).

“THE GOOD WIFE is heading into its third season with tremendous momentum from last season’s finale,” says Joe Ferreira, SVP, Network Liaison and Original Content, CBS Interactive. “The Ultimate Fan Sweepstakes will not only reward one fan with a behind-the-scenes set visit to New York, but will also help refresh viewers on the dramatic events from the past two seasons, leading up to the season premiere on Sunday, September 25.”

*NO PURCHASE NECESSARY. A purchase will not increase your chances of winning. You have not yet won. Open to legal residents of US who are at least 18 or age of majority in their state of residence, whichever is older, or older, at the date of entry. Sweepstakes ends at 11:59:59 PM PT on September 29, 2011. Void where prohibited by law. For Official Rules visit www.cbs.com/shows/the_good_wife/ultimate_fan.