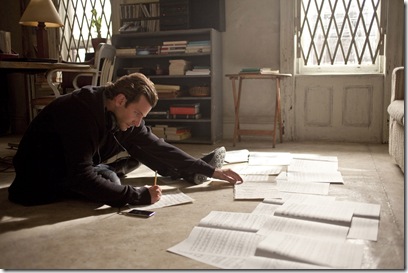 The central conceit of Limitless is this: what would happen if there was a drug that could literally allow a person to use 100% of their brain? According to current scientific belief, we only use 10-20%, maximum.

Eddie Morra [Bradley Cooper] is a struggling writer. He hasn’t written a word of his novel, but he’s spent his entire advance and is, essentially, living on the avails of his girlfriend, Lindy [Abbie Cornish] – who has had enough. Now, bereft of income and girlfriend, he runs into his ex-brother-in-law, Vernon [Johnny Wentworth], a disreputable sort who has graduated from selling drugs – as we know them – to something called NZT. NZT enables its user to fully utilize their brain. There, are of course, side effects.

Eddie tries a sample and in a very short time, he’s firing on all cylinders. He dashes off several chapters of his book with ease – but wakes up the next morning back to normal. First thing, he drops off the pages to his editor and then heads to Vernon’s place. It’s torn to bits and Vernon is in almost as bad a shape – he’s dead! Fortunately, Eddie has enough brains, on his own, to find Vernon’s stash and before you know it, he’s finished his novel [total time elapsed: four days], and begun a career in finance, where he turns a couple thousand dollars into two million in twelve days – earning an audience with Carl Van Loon [Robert De Niro], who drafts him to help out on a major merger in the energy sector.

Problems arise when Eddie’s loan shark [where else would he get a couple thousand dollars on short notice?] decides that he doesn’t care that Eddie’s paid him in full – he wants in on whatever secret has made Eddie rich. From here, the film balances investing intrigue with the conventions of a standard thriller. Although it’s not really the best way the film could have gone, it is sharpened by Gennady’s [Andrew Howard] obtaining and using NZT.

The film builds to two separate but involving climaxes – Eddie facing Gennady and his enforcers, and the result of Van Loon’s attempted merger. Eddie’s situation is set up by a brief opening scene where we see him considering suicide on the balcony of a very uptown condo – a situation that also ties into the merger. And then, there are those pesky side effects…

Limitless is based on the novel The Dark Fields [which I have not read], by Alan Glynn and Leslie Dixon’s script probably takes more than a few liberties with it. I suspect the book doesn’t devolve into a standard thriller [however freshly twisted], but film does work reasonably well, so we can forgive her.

Neil Burger [2006’s The Illusionist] not only keeps things moving well, he also finds interesting ways to give the reader some idea of what’s going on is Eddie’s head when he’s working. As Eddie writes his novel, we see letters dropping from the ceiling of his apartment; when he’s working his financial magic, there are shots of ticker-tape-like number and letters sequences that roll over on the tin tiles of his ceiling and run on a neon screen across his vision; when he gets in a fight [Gennady’s thugs], he flashes on martial arts movies he read, and animatic sequences that show body movement and reaction. Just because Limited takes a turn into the usual, that doesn’t mean that it can’t look at it in unexpected ways.

Also cool, is the way the film concludes – moving out of the thriller framework imposed on the third act and going back to the smartness of the first act-and-a-half. It’s a remarkably fitting ending that manages to be a happy Hollywood ending and, yet, something else, as well.

Limitless may get sidetracked by its excursion into thriller mode, but it remains a satisfying way to intelligently kill a couple of hours.

One thought on “Limitless Is Limited But Effective!”