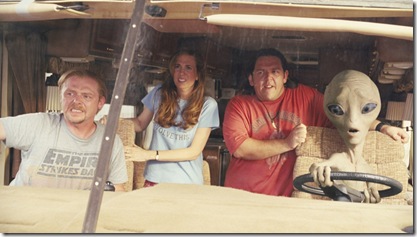 Graeme Willy [Simon Pegg] and Clive Gollings [Nick Frost] are visiting America to fulfill a lifelong dream – they’re here to attend Comic-Con and then tour legendary UFO-related sites like Area 51, The Black Mailbox and Roswell. Following Comic-Con, they set out – taking photos of themselves in front of the Black Mailbox and the AlieInn and generally having a grand time.

That all changes when they are almost run off the road by a crazy driver. When the car leaves the road, the two stop to offer assistance [they’re good boys, after all] when they meet Paul. He’s the absolute image of extraterrestrials as shown on TV and there’s a reason for that – Paul’s image has been dropped into the public consciousness for over sixty years in the hope that we won’t spazz out if there’s an official first contact.

Paul, it turns out, has escaped a secret government installation and is trying to get to a specific location where his people will pick him up and take him home. The big hitch in his plan is that he’s being pursued by the very scary Secret Service Agent Zoil [Jason Bateman, who manages to be both scary and hilarious simultaneously]. Two promotion-seeking agents, Haggard [Bill Hader] and O’Reilly [Joe Lo Truglio] add comic complications.

Along the way, the guys pick up Ruth Buggs [Kristen Wiig], an evangelistic Christian who runs a trailer park with her father – and whose belief system takes a major hit when she meets Paul.

Greg Mottola [Superbad, Adventureland] directs from a script by Pegg and Frost and produces a fun little film that affectionately pokes at the conventions of both skiffy flicks and road trip/buddy movies. The film opens with a lot of energy as Graeme and Clive enjoy Comic-Con, and we learn how Paul arrived on Earth, but it feels like the film doesn’t really achieve full focus until the boys are on the road. 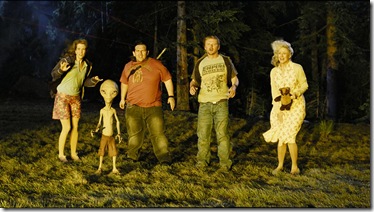 Unlike Pegg and Frost’s collaborations with Edgar Wright [Shaun of the Dead, Hot Fuzz], there’s no feeling that the film is trying for a lot of over-the-top comedy bombshells. The comedy is more character driven and based in the world of geekdom – a not really explosive place. Most of the pop culture targets are hit solidly, but without a lot of fuss, but it’s Rogen’s voicing of Paul as an occasionally obnoxious but ultimately good-hearted guy who just happens to be from another planet that will win or lose an audience.

For me, it works. As the film moves along, Rogen’s performance is bolstered by Wiig’s Ruth as she tries to figure out what life should be without her precious belief system. Oddly enough, except for the awkward cussing and a desire to fornicate[nicely sublimated], she seems to decide that being a good person is its own reward – a nice counterpoint to the film’s villains, who seem to be willing to do some nasty stuff in the name of national security.

As the film reaches its conclusion, the story turns full circle. Paul attempts to make up for the harm he caused on his arrival [a dog died, it wasn’t pretty, let’s just move on] and the final confrontation between the guys and The Big Guy [Zoil, Haggard and O’Reilly’s boss] takes place – in what seems to be a scene that was written solely to allow Sigourney Weaver and Blithe Danner quote ‘Aliens.’ It’s another moment where the film feels unfocused, but it recovers just enough to spoof Spielberg for the second time [I didn’t mention Steven Spielberg’s sort-of-cameo? You’ll love it. Trust me!]. All’s swell that ends swell, and Paul does get that right.

It might not match Pegg and Frost’s work with Edgar Wright, but Paul is a very amusing film that is well worth seeing.