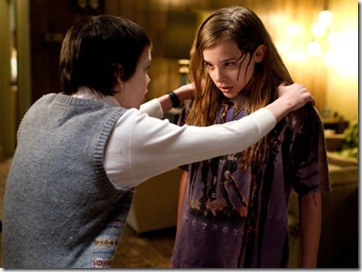 Reeves’ version is still about a lost, bullied little boy, Owen [Kodi Smit-McPhee] and his cautious but growing friendship with an equally lost little girl, Abby [Chloe Grace Moretz]. Both are twelve – though she’s been twelve “for a very long time.” They meet shortly after she and her apparent father [Richard Jenkins] move into the apartment next door to Owen and his mom.

In order to draw the audience into the movie more quickly, Reeves [who also wrote the screenplay] chooses to open almost halfway into the story, with police escorting an ambulance to a hospital and then cutting to Elias Koteas’ policeman talking to a person in a hospital bed. He leaves to take a phone call and there’s a scream. He runs back to the room to find the window open and a body on the ground below. A card flashes, “Two weeks earlier.”

As in the novel and first film, the boy and the girl meet by the jungle gym in the apartment building’s courtyard. It is the middle of winter, but she isn’t wearing shoes. The first thing she says to him is, “We can’t be friends.” He asks why but gets no answer. She is intrigued by a Rubik’s Cube he’s playing with. He suggests she try it. Over the next while, they continue to meet. Meanwhile, the father is trying to obtain blood for her and finally, screws things up badly enough that he must disfigure himself with acid so he can’t be connected to her. 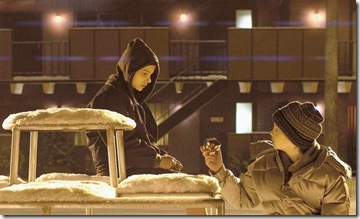 Before Owen meets Abbey, we see him using a telescope to peer into the lives of others in the apartment complex. It’s a reference to Hitchcock’s The Rear Window, it also serves to show how alone Owen is – he doesn’t even have a connection to his own mother. We also see him bullied at school by three boys in his class, lead by Kenny [Dylan Minnette], a savage bully with his own secret. Eventually, Owen learns Abby’s secret and, though torn, doesn’t give up his friendship with her. After all, she is as alone as he is – and they both recognize that need for connection in each other.

The key moment, for me, is when Owen asks Abby if she’s a vampire. It would seem to be a yes or no question, but her reply is so poignant that Owen makes the decision to remain her friend right there. You can see it in their eyes. At that moment, it is so clear that Abby really is twelve – not a centuries old woman trapped in a kid’s body, but an immortal twelve-year old girl. For everything she’s learned over her elongated lifespan, she is at the same emotional point as Owen. And there’s the true point of connection.

Where Let the Right One In played Oskar and Eli’s situation for the melancholy, Reeves, without sacrificing that aspect of the original film, uses the ‘80s setting of New Mexico to build layers of paranoia. Owen lives in fear of Kenny and his humiliating attacks; Abby lives in fear of her nature being discovered; the whole country is living in fear of The Evil Empire as President Ronald Reagan reduces the world to them [Evil] and us [Good] – though we know it’s not that simple, that’s the way the Reagan administration would have had us think.

Reeves also uses ‘80s pop songs to good effect. There’s a moment, for example, where Owen has taken Abby to an arcade and, as they play Ms. Pacman, Culture Club’s do You Really Want To Hurt Me plays in the background.

Reeves takes the violent scenes from the book/original film and either brings them into harder, closer focus, or omits them [Victoria and the cats]. He adds a sequence involving a car that has a unique resonance to Americans – further building the audience’s level of paranoia.

The heightened violence is effective because Reeves has given us characters, in Owen and Abby, that we have gotten to know. When either is threatened, our stomachs tighten. When there is actual violence, we feel real fear. Reeves has chosen not to hit us with lots of cheap laughs and even cheaper hyperfast edits. The CG effects are kept to a minimum, and the practical effects – as when Owen sees what Abby looks like when she’s thirsty – are down and dirty. The most unnerving effects, though, are little moments – as when Abby is looking out a window and, for a second, her pupils are like a cat’s.

When I heard that Reeves was going to be doing a North American version of Let the Right One In, I wasn’t as appalled as many critics – and a sizable percentage of the few hundred thousand North Americans who had seen the film. After his work on the clever monster movie, Cloverfield, I was more intrigued than anything else. I expected Let Me In would be an intriguing, even good film.

I just didn’t expect it to be this good.

One thought on “Let Me In – Supernatural Coming of Age Thriller!”