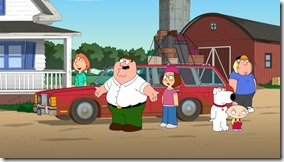 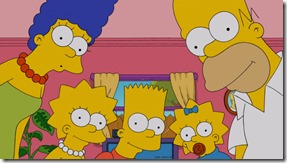 In a sure-to-be-classic episode of FAMILY GUY, two of the most iconic and revered families on television will come together when the Griffins end up in Springfield and meet the Simpsons. The FAMILY GUY episode will air in Fall 2014 on FOX.

“Finally I can get my hands on this guy!,” added Homer Simpson.

In “The Simpsons Guy” episode of FAMILY GUY, Peter (Seth MacFarlane) and the Griffins get out of dodge and end up in Springfield, where they are greeted by a friendly stranger named Homer Simpson (guest voice Dan Castellaneta), who welcomes his new “albino” friends with open arms. The families get along famously: Stewie (MacFarlane) becomes obsessed with Bart (guest voice Nancy Cartwright) and his old-fashioned pranks; Lisa (guest voice Yeardley Smith) takes Meg (Mila Kunis) under her wing and is determined to find something – anything – at which she excels; Marge (guest voice Julie Kavner) and Lois (Alex Borstein) ditch housework for a little bonding; and Peter and Homer fight over the best beer in town – Pawtucket vs Duff.

Entering its 11th season, FAMILY GUY continues to entertain fans with its shocking humor, memorable cutaway gags, dazzling musical numbers and epic episodes. Since its debut, the series has reached cult status among fans, and its breakout star, a talking baby, has become one of the greatest TV characters of all time. FAMILY GUY has racked up numerous awards, including an Emmy nomination for Outstanding Comedy Series, only the second animated series in television history to be honored with such a distinction.

FAMILY GUY follows the adventures of an endearingly ignorant dad, PETER GRIFFIN (MacFarlane), and his hilariously odd family of middle-class New Englanders in Quahog, RI. LOIS (Borstein) is Peter’s wife, a stay-at-home mom with no patience for her family’s antics. Then there are their kids: 18-year-old MEG (Kunis) is an outcast at school and the Griffin family punching bag; 13-year-old CHRIS (Seth Green) is a socially awkward teen who doesn’t have a clue about the opposite sex; and one-year-old STEWIE (MacFarlane) is a diabolically clever baby whose burgeoning sexuality is very much a work in progress. Rounding out the Griffin household is BRIAN (MacFarlane), the family dog and a ladies man who is one step away from AA.

FAMILY GUY is a 20th Century Fox Television production. Seth MacFarlane is creator/executive producer. Rich Appel and Steve Callaghan serve as executive producers/showrunners, while Mark Hentemann, Danny Smith and Kara Vallow are executive producers. “Like” FAMILY GUY on Facebook at www.facebook.com/FamilyGuy. Follow the series on Twitter @FamilyGuyonFOX and join the discussion at #familyguy.

The longest-running scripted show in television history, THE SIMPSONS exploded into a cultural phenomenon in 1990 and has remained one of the most groundbreaking and innovative entertainment franchises, recognizable throughout the world. Currently in production on its record-annihilating 25th season, THE SIMPSONS has won 27 Emmy Awards and was nominated for an Academy Award in 2012 for the theatrical short “The Longest Daycare.” They have been the subject of a hit feature film, created a revolutionary virtual coaster ride at Universal Studios, received a Star on The Hollywood Walk of Fame and been honored with five U.S. postal stamps personally designed by Matt Groening. Named the “Best Show of the 20th Century” by Time magazine, THE SIMPSONS also was named “Greatest American Sitcom” by Entertainment Weekly.

THE SIMPSONS is a Gracie Films production in association with 20th Century Fox Television. James L. Brooks, Matt Groening and Al Jean are the executive producers. Film Roman, a Starz Media Company, is the animation house. Visit THE SIMPSONS website at www.thesimpsons.com.