Günther Bachmann (Philip Seymour Hoffman) is head of a small German intelligence organization – he has only a handful of people on his team. They have been trying to find a way to get to a suspected financier of terrorists name Faisal Abdullah (Homayoun Ershadi, The Kite Runner, Zero Dark Thirty).

He is based in Hamburg, apparently because of an operation that went sideways some years before, but he doesn’t seem to mind – in fact he seems to prefer it that way.

When Issa Karpov enters Germany, (Grigoriy Dobrygin), he seems of interest and, before long, the more, er… legal… German intelligence community discover his presence as well. When Karpov seeks aid from a Muslim family, metaphorical alarm bells go off – but a young lawyer, Annabel Richter (Rachel McAdams, Midnight in Paris, About Time) comes to his aid.

It seems that he has been told to contact a German banker named Tommy Brue (Willem Dafoe, Shadow of the Vampire, 4:44 Last Day on Earth). He carries a letter to his father from Brue’s father.

Making the picture more complex, there’s a wry CIA agent, Martha Sullivan (Robin Wright, House of Cards, The Princess Bride), who has stepped in ‘to observe.’

To say much more would be a disservice to writer Andrew Bovell (Edge of Darkness) and Anton Corbijn (the criminally underappreciated The American). They have taken le Carré’s novel and turned into a movie so tense and claustrophobic that despite its absolute minimum of violence, it could be disastrous for someone with high blood pressure.

In one of his last roles, Hoffman is superb as the overworked, underpaid, not-strictly legal intelligence officer who sees a big picture that remains completely beyond the scope of anyone else in the movie. His ultimate aim? To make the world a safer place. For him, it’s just that simple. He doesn’t give a damn about politics, or image, or scoring a big win now. His is the long view and – as we can tell from the way he carries on after being assigned this crap job away from Berlin, he is prepared to bang his head against whatever walls might be placed in his path. 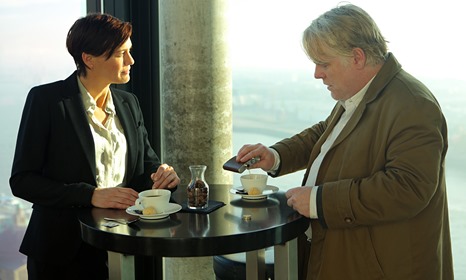 His team are so loyal to him and their work, that anyone with half a brain would see that there must be a reason for it – it just might be possible that he’s right. Instead, he’s treated with polite condescension, which leaves him with more space to work, but little room for error.

As we get deeper into A Most Wanted Man, it becomes clear that Karpov is an innocent – something that Bachmann comes to believe along with Richter. He comes up with a plan to use Karpov’s connection, however slight, with Brue to set a trap for Abdullah and persuades Richter to help him. She agrees when he finally persuades her that he wants to ‘save him.’ How he came to be able to persuade her comes under the heading of not-strictly-legal – as is his plan.

Even though there’s maybe a minute of what might be thought of as ‘action’ in any movie sense, A Most Wanted Man amps up the tension through careful pacing – never lingering too long in any one sequence; using a gloomy palette of blues and greens for most of the film; keeping shots relatively tight even when outdoors.

Whatever is going on, whenever it is going on, we are on top of it – practically inside it. No matter how much space there is, it’s never enough – this is not a film for claustrophobes.

The score, by prior Corbijn collaborator, Herbert Grönemeyer (The American), is subtly unsettling – mostly in minor keys and rarely rising above the background noise. Even then, it is as careful and precise as Corbijn’s shot selection.

Subtly is the key to A Most Wanted Man. Nuanced performances – the slightest changes of expression convey vast amounts of mood and stress – from a truly amazing international cast, conducted by a maestro.

Watching Hoffman and McAdams is a joy – she matches him in intensity and their interplay is impressive. Nina Hoss and Daniel Brühl are equally terrific in smaller roles as part of Bachmann’s team.

In fact, A Most Wanted Man is a confluence of excellences – writing, acting, directing, composition, all are superb. The result is a film that might just make its audience think – releasing it in the middle of summer might not have been the best strategy. On the other hand, it is certainly a wonderful break from tentpoles, however great or awful they might be.

Maybe we need more studios and distributors to place this kind of film on their summer schedules.